Almost seven years after Schools Week first profiled Rachel de Souza, we return to find out what she wants to do with the top role for protecting children in the country

“We’re like a little republic within the Department for Education!” Rachel de Souza beams at me. The recently appointed children’s commissioner for England is standing in front of her new desk on the sixth floor of Sanctuary Buildings, looking through the glass wall of her office at the small nation of researchers and analysts occupying a long room of desks.

She calls one in (“he’s brilliant,” she whispers) to explain her role: apparently she is “truly independent” of the government, sponsored by the DfE but not required to execute its policy. The office, which has been around for 17 years, should challenge and recommend what the DfE and other departments can do for children. In the role, de Souza counts as a ‘corporate sole’, which means she is herself a legal entity, a set-up that underlines her independence.

“The Queen is one too,” de Souza beams again. Wearing shoes with small bows and golden high heels, she is rather queen-like. But before looking into what her six-year reign will bring, let’s begin with how it started.

Queries about change of heart

It was an appointment many accused the former academy trust boss of inheriting on connections, rather than merit. After she applied for the job in August, she had multiple interviews including a student panel and a Zoom with Gavin Williamson, before she got the call late one December night.

She’s been in the post since March 1, but not before many tweets pointed to the patchy record of her academy chain, the Inspiration Trust, on inclusion. The education select committee only narrowly approved her appointment, doubting her “knowledge and experience” outside the schools sector.

No one is saying, ‘I won’t talk to that terrible children’s commissioner’

They also questioned her commitment to the most vulnerable children, the specific remit of the children’s commissioner. High fixed-term exclusion rates and a lacklustre response to children leaving for home education at the Inspiration Trust were raked over. About three years ago de Souza also signed a letter from her campaign group Parents and Teachers for Excellence “supporting in the strongest possible terms the right of heads to exclude pupils” legally.

Yet now de Souza has said “the children’s commissioner absolutely wants to see exclusions down to nothing”. The change of tone – and her close work at Inspiration with founder and Tory donor Lord Agnew – have led to queries about her authenticity, and accusations of nepotism.

‘Take on the message’

It can’t have been the easiest start. “I have found since coming here that every door is open – no one is saying, ‘I won’t talk to that terrible children’s commissioner’,” de Souza smiles. What about the education select committee saying “Dame Rachel faces a steep learning curve in taking on this complex role”? Did she find it patronising? Would the same have been said about a male applicant?

She rather graciously sidesteps the question. “What our discussion showed is how broad this role is,” she nods, pointing out she is the fourth children’s commissioner, following incumbents with medical, local authority and charity backgrounds respectively – the last being Anne Longfield, from the 4Children charity.

“If you’re confident in yourself as a leader, you let these things roll off you – but you also take on the message. I’ve been getting out to care homes, youth justice settings, NHS groups. There is a huge learning curve,” she says, adding seriously: “What I really hope is the committee will be delighted.” 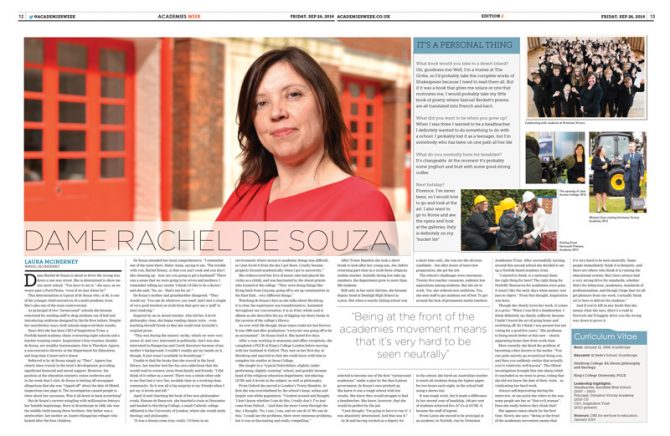 How will she ensure this? First, de Souza has launched a survey of children called the Big Ask to seek out what their concerns and hopes are. It aims to be the largest consultation with children ever undertaken in England.

With the evidence, she wants to set up “expert groups” to help her “create a joined-up strategy for children that will take us through the next ten years”.

“What I’m finding is there isn’t that joined up-ness for children,” she says, adding she wants her office to bring the “best, most brilliant ideas” about supporting pupils all together.

The children’s commissioner role currently has “two halves”, she continues: providing evidence and policy. These halves are enabled by the role’s “two superpowers”, which are being able to ask for data from any public body, and to gain entry to any place where children are. From these functions, de Souza wants to create a third: “innovation”. Her ten-year strategy for children will be about innovating a new, overarching approach.

After testing the survey questions at some of her old schools, de Souza already has an idea of five areas for the strategy: family, education, mental health, work and community. “Kids are talking to us about family strain, marriage, hopes for families of their own,” she explains. “Then, they’re concerned they’ve missed a lot of school, so are we offering the right curricula, the right pathways?”

She adds: “Children also have lots of concerns about mental health since Covid, so we’ll definitely be looking at a proper plan for that.” She’s rightly worried about a “feeling of intergenerational inequality” in terms of job opportunities, while the fifth focus is “something around civic pride, where I come from, the place I’m from”. She wants to look at the “wider activities” children can access where they live.

Indeed, geographic place is central to the joined-up strategy – likely an insight from de Souza’s time spent in a rural, coastal area. “Every year, we publish the best city to live. I’d almost like to do a ‘Where is the best place to grow up as a child?’,” she says, adding it would be like an index drawing in lots of data, possibly including rates of exclusion and home education, to build up a localised picture. 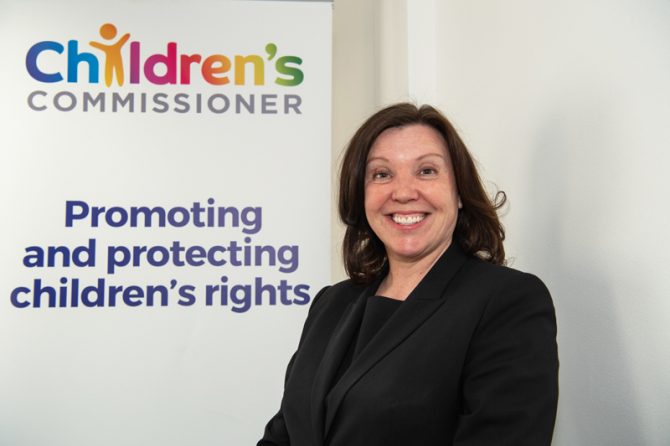 Given de Souza is only six weeks in, it’s a commendably ambitious plan. To make ministers listen to it, she’s clear she will take a different approach to Longfield, whose parting shot was to accuse the government of an “institutional bias” against children. De Souza delicately states: “Some in this role have found where the problems are, and then very strongly and publicly held ministers to account.”

Instead, she wants to work “collaboratively but independently. Praise what’s working, and support ministers to find solutions where it isn’t.” It would be easy to say the government is in for an easier ride. But de Souza has a knack for working the political system in order to exert greater influence. Perhaps this quality should be recognised as a strength, rather than a suspicion.

Less focus on only the vulnerable

Rather, my concern is de Souza’s lack of focus in our conversation about specific groups of vulnerable children, such as those with special educational needs and disabilities, in prison, or refugee children. She’s picking up on themes, but less on groups. Indeed, this seems to be a deliberate part of her strategy. “Some people thought this role was for the most vulnerable children, but post-Covid, it’s really for all children.” There’s something sensible in this, but de Souza has made the mistake of overlooking specific groups of children before, and came to regret it. In 2018/19, her trust’s fixed-term exclusion rate was 17.2 per cent, compared with 1.4 per cent nationally. How did she miss that?

She tells me it was a “blip year” but adds: “I realised I’d been putting my efforts into outcomes […] All the heads were acting, I believe, with integrity, but I think they knew my questions to them were all going to be on outcomes and curriculum.” When she saw the exclusions data, de Souza said she thought, “No, we need an inclusion strategy”.

So what’s her strategy for SEND children now? “I’m developing my thinking here,” she replies. “For me, it’s the whole layer around special educational needs, mental health, those children in the pre-care threshold, that needs the best thinking.” She adds, “We’ve got to put children first.” The answer is vague.

In a way, the question is not whether de Souza should have the role: she has considerable experience working with children of all backgrounds, and a track record of achievement in tough stakeholder environments. The question is whether any other candidate for the job had much greater expertise with extremely vulnerable children.

Yet de Souza’s ambitiousness can give her “little republic” and the education voice real clout within the corridors of power. “I want to put schools bang in the middle of this office,” she tells me. It seems unlikely she’ll stand for questions being ignored. “Wouldn’t it be great if we had a children’s minister who attended Cabinet?” she turns to me, eyes shining. “Wouldn’t that be great?”