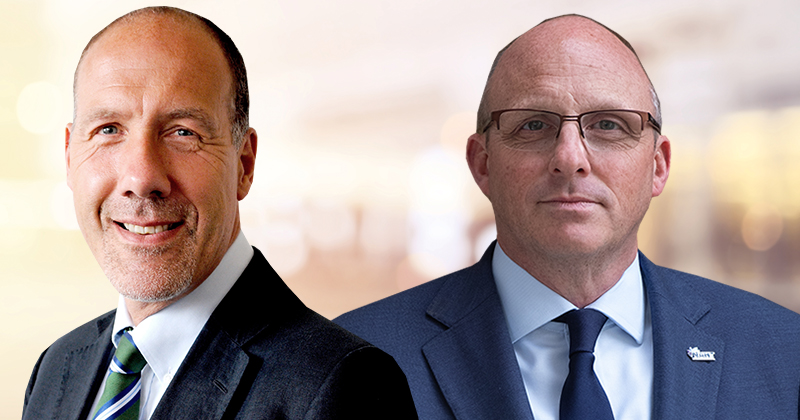 Ministers will make the final decision on whether to press ahead with its schools reopening plan on May 28, a union leader has revealed.

Geoff Barton (pictured above left), the general secretary of the Association of School and College Leaders, said the government will “review the latest science” next Thursday, and that the return of some pupils on June 1 “will be delayed” if the evidence does not support the decision.

Union leaders were briefed by government scientific and medical advisers on Friday, after tensions escalated between the government and the schools community.

The government wants reception, year 1 and year 6 pupils to return to primary schools from June 1, followed by the remaining primary year groups in mid-June. Ministers also want secondary schools to offer some “face-to-face” support to year 10s and 12s from June 1 onwards.

Barton said that he had been “reassured” by feedback from scientific advisers, and said ASCL, which mostly represents secondary heads, would “continue to support our members in preparing for the reopening of schools from June 1”.

However, he said the plan for all primary pupils to return before summer was still a “concern”.

“It is also important to understand that the government will only make the final decision on whether to press ahead with the reopening of schools when it reviews the latest science on May 28, and that if the evidence does not support this decision at that time, it will be delayed,” Barton added.

Cabinet office minister Michael Gove claimed in a television interview this weekend that the government was “confident that children and teachers will be safe”.

“The clear scientific and clinical advice is that it is safe to have schools reopen, accompanied with social distancing,” he told the Andrew Marr show.

Speaking on the Today programme this morning, Paul Whiteman (above right), general secretary of school leaders’ union NAHT, invited ministers to write to him “with the scientific evidence underpinning the confidence it has that a return to school for more pupils can be done safely”.

“It’s been asserted by the government publicly over the weekend that there isn’t the level of risk that we fear, however, we haven’t yet seen the scientific underpin of that,” he warned.

On Friday, the government published an overview of the scientific advice it has received over the impact of the coronavirus on children and schools.

However, it lacks detail and was littered with errors.

Meanwhile, Hartlepool council has become the second local authority to announce its schools will not reopen on June 1.

Schools Week revealed last week that Liverpool council had confirmed plans to defy the government’s wishes, stating that its schools would not begin to accept pupils until June 15 “at the very earliest”.

A survey by the Institute of Fiscal Studies released today shows children from better-off households are spending 30 per cent more time each day on educational activities than children from the poorest fifth of households, equating to a gap of an hour and a quarter every day.

But Alison Andrew, senior research economist at the IFS, said fewer than a third of parents in the poorest families would send their children back to school given the choice, compared with half of parents from more affluent backgrounds.

“This risks leaving the children least able to cope with home learning remaining at home even as their better-off classmates return to school,” she added.

It comes after the leaders of 22 academy trusts used a letter to the Times newspaper to state that reopening schools was “essential”, and that some of the debate on the subject had been “unhelpful and doesn’t reflect our sector”.

The signatories included Julian Drinkall, the CEO of the Academies Enterprise Trust, Rowena Hackwood from the David Ross Education Trust, Sir Dan Moynihan of the Harris Federation, Martyn Oliver from Outwood Grange and Hamid Patel, the CEO of Star Academies.