Liverpool City Council has defied government calls for pupils to return to classrooms from June 1, saying children will not go back to its schools until June 15 “at the very earliest”.

Documents leaked to Schools Week show the local authority plans to follow-through with its threat to defy the government over concerns it will not be safe for primary pupils to go back at the beginning of June.

It comes after leadership unions reminded their members that it was up to schools themselves to decide whether or not it is safe to open.

Mayor of Liverpool Joe Anderson said earlier this week that the city may “resist” the call to reopen schools on June 1, following Boris Johnson’s announcement that he wants reception, year 1 and year 6 pupils to go back after the May half term break.

Questioned on Newsnight about the plans, Anderson said: “We are concerned. We have a safeguarding responsibility for our children, our staff, and teachers in the schools.

“We are concerned about allowing children back into school who could either get the virus themselves or spread the virus.”

Liverpool has been operating around 50 of its primary schools as “safe space hubs” for vulnerable pupils and the children of key workers since March 23. These are due to close next Friday and schools will reopen on June 1, but not for all reception, year 1 and year 6 pupils as the government has requested.

In a letter to schools, seen by Schools Week, council director of children’s services Steve Reddy said the “only children” returning to school on June 1 should be the children of key workers and vulnerable pupils.

“Our position is that no other pupils should be returning to school before June 15 at the very earliest, subject to rigorous risk assessments having been undertaken. I will communicate to you by June 8 as to whether this date still stands,” he said.

Reddy has also promised “full guidance for possible reopenings” for schools, which will set out “the proposed approach beyond June 15”.

Diagrams shared with schools show that the council is considering allowing only year 6 pupils back on June 15 “subject to review and where safe to do so”. Selected other year groups would then return in the week beginning June 29, again as long as it is safe. 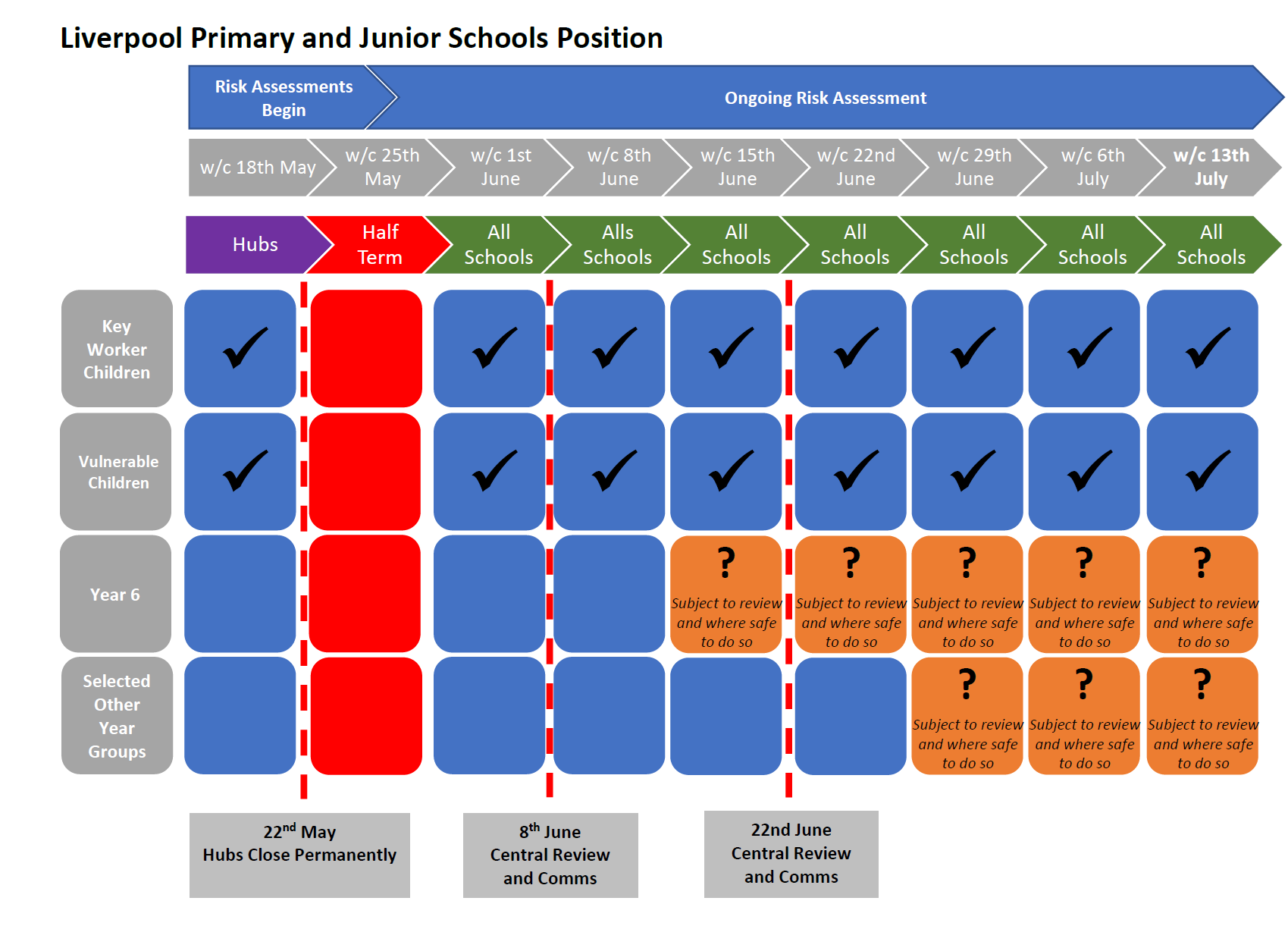 They also show the council’s plan for the return of its secondary schools, with “some face to face” interaction also planned from June 15.

The council has said exact dates “will vary from school to school” and the timetable “may well slip”.

“Throughout this period, you have acted at speed with incredible patience and tenacity in the face of an impossible situation. You and your staff have given up holidays, worked longer days and been tirelessly selfless. None of this is taken for granted.”

According to government data, the vast majority of primary schools in Liverpool are still under local authority oversight.

The BBC has reported that as of Wednesday, Liverpool has had 1,515 confirmed cases of coronavirus infection, equivalent to 306 in every 100,000 people. 448 people in the city had died with COVID-19 as of May 1.

It’s not clear whether the government can force schools to take in certain groups of pupils. Leadership unions have previously said they will back headteachers and their governing bodies to decide whether it’s safe to reopen.

The government passed emergency legislation earlier this year, the coronavirus act 2020, which allows the secretary of state, in this case Gavin Williamson, to make “continuity directions” in relation to the running of education establishments.

To do this, Williamson would have to have regard to advice from the UK chief medical officer, and be satisfied it was a “necessary and proportionate action”.

However most schools are already open, for vulnerable children and those of key workers. So it’s unclear whether this power could be used to force schools to admit more pupils.