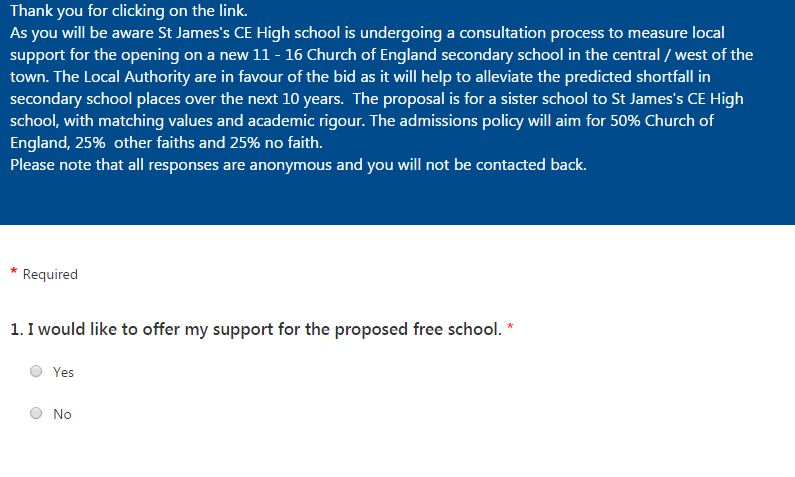 A Church of England school is consulting on opening a free school which would break the 50 per cent cap on religious places – but said its website was “incorrect” when questioned by Schools Week.

The proposal for the school, which would open in September 2019, would break current laws which say no more than half of places at new and over-subscribed schools may select pupils based on faith.

However, the Department for Education (DfE) backed the school’s right to propose 75 per cent of places for religious pupils, despite the school itself backing down when asked by Schools Week.

Headteacher Tania Lewyckyj said the “original literature that went out is incorrect” and the school was only proposing a 50 per cent cap on faith.

Lewyckyj would not answer why a consultation questionnaire for parents about the proposals still clearly stated it intended to open 75 per cent of places based on faith on the school’s website.

The questionnaire asks for expressions of interests regarding a proposed “sister school to St James’s CE High School, with matching values and academic rigour. The admissions policy will aim for 50 per cent Church of England, 25 per cent other faiths and 25 per cent no faith.”

Completed questionnaires such as these are often used by free school proposers to show demand for a school. It is not known if the school will void expressions of interest gathered using the mistaken criteria.

But the DfE defended the right of schools to propose the admissions criteria they wanted – even if these currently did not meet the requirements.

A spokesperson told Schools Week that there was “nothing to stop a free school proposer looking into the future” and “bearing in mind” the government’s education white paper, Schools that Work for Everyone.

The white paper, whose arrival date is uncertain, is likely to propose lifting the cap on new free schools so they could admit up to 100 per cent of pupils based on faith.

“Free school proposers are at liberty at the consultation stage to propose any admissions criteria that they want, and there’s nothing to stop them from doing that,” said the DfE spokesperson.

But the school has now said, even if the white paper went ahead and the cap was lifted, it would still “retain the 50 per cent cap, as we feel this is the best option in our community.”

Unions strongly criticised the DfE’s willingness to defend a free school proposal that is not permitted under current regulations.

Kevin Courtney, general secretary of the National Union of Teachers (NUT), said the DfE were “jumping the gun” by assuming the recent green paper would be agreed in Parliament, and should not be allowing free school proposals that “blatantly flout the law”.

Malcolm Trobe, interim general secretary of the Association of School and College Leaders (ASCL), said all current proposals should be “assessed under the current regulations”.