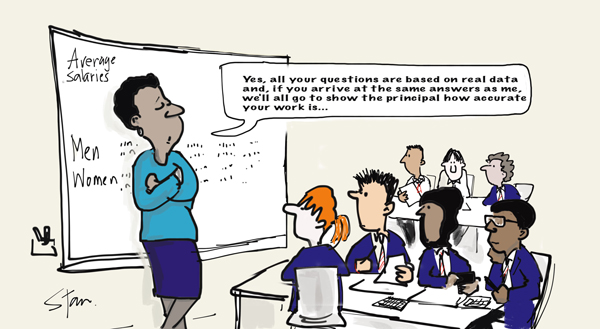 Employers that fall under the new requirement have until April next year to publish figures on their websites, as part of a government pledge to champion gender equality.

Statistics will then have to be published every year thereafter.

Mandatory figures for reporting include the median and mean gender pay gap, the proportion of men and women in each quartile of the pay structure, and pay gaps in any bonuses paid out during the year.

Employers will also be encouraged to publish an action plan alongside their figures showing how they will close any pay gap. Education secretary Justine Greening (pictured right) , whose brief includes equalities, said: “Helping women to reach their full potential isn’t only the right thing to do, it makes good economic sense and is good for British business.

“I am proud that the UK is championing gender equality and now those employers that are leading the way will clearly stand out with these requirements.”

The union said this was because men have a “far greater likelihood” of securing promotion.

But the gender pay gap in schools is smaller than the national gap, which the government states is 18.1 per cent.

The gap for teachers widens when just leadership positions are considered. Women headteachers earn on average £8,300 less than their male counterparts, the union said.

The UK is championing gender equality

Advice published online by Wrigleys Solicitors state there is no requirement for schools’ gender pay gap statistics to be prominent on websites, but must be “accessible to both employers and members of the public”.

Schools can also provide annotations and narrative to give context to the figures.

There are currently no penalties or enforcement measures for organisations that fail to comply, but the law firm said non-publication of the gender gap figures is likely to carry reputational risks.

Harrison Clark Rickerbys solicitors stated on its website the definition of employees is “wide”, and will include casual workers if they work under contracts of employment governed by UK legislation.

The law firm also said measuring the pay gap is labour intensive, but advised schools to consider “dry runs” of their statistics so they can analyse any potential gap.

Eliminating work-related gender gaps could add up to £150 billion to the country’s annual GDP by 2025, the government said.

The regulations will cover approximately 9,000 employers with over 15 million employees, representing nearly half of the UK’s workforce.

What schools need to know:

By identifying the wage of the middle earner, the median is the best representation of the ‘typical’ gender difference, the government said.

Employers will be asked to use data from a ‘snapshot’ period in April to calculate this average.

Proportion of men and women in each quartile of pay structure

This data will show the spread of male and female earners across an organisation, helping to show employers where women’s progress might be stalling so they can take action to support their career development.

As there is a significant issue around bonus payments in some sectors, the government stated employers will also have to publish the proportion of male and proportion of female employees that received a bonus during the year