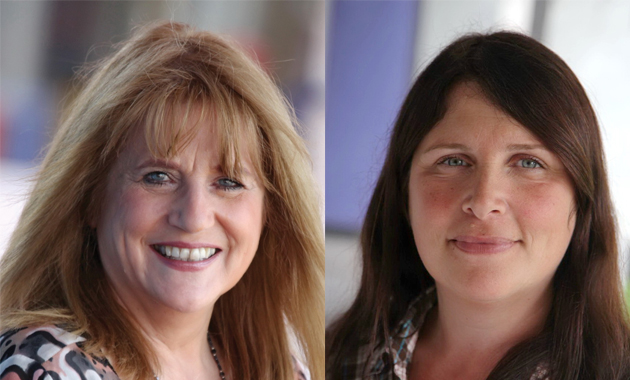 A unanimous vote by the board of the Cuckoo Hall Academies Trust yesterday lifted the suspensions on executive headteacher Patricia Sowter and headteacher Sharon Ahmet.

Trustee Phill Sowter, who spoke out last month to deny allegations of gross misconduct, also had his suspension removed on January 8 after all three spent more than a month away from work.

The suspensions were announced in late November by the then trust chair Andry Efthymiou (above, right), who has since been removed from her position pending further investigations.

The board voted to overturn the suspensions after the receipt of two external reports – one by the Education Funding Agency (EFA) and the other by an independent organisation commissioned by the board.

Following ‘exhaustive interviews’ with Ms Sowter (above, left) and Ms Ahmed with reference to the report, the board concluded the evidence did not support “any charge of misconduct let alone gross misconduct”.

The allegations surrounded claims of bullying and harassment and that attainment results had been falsified, no evidence of this was found.

Following the meeting, the trust’s interim chair Marino Charalambous said the board looked forward to welcoming them back to work.

He added: “The conclusions of two very detailed external reports showed the evidence did not stack up in support of any charge of misconduct of any sort.

“We are delighted that they will both be returning to continue the progress in ensuring excellent outcomes for all our pupils.

“The board and teachers of Cuckoo Hall Academy Trust remain deeply committed to our mission to drive up the quality of education provision and standards in the area.”

Another Governor of the Trust, Donald Graham said: “The board recognises the regrettable damage that has been done at a very personal level to the reputations of these two senior teachers and academic leaders at the Trust who have been vindicated by this process.

“With their renewed assistance and the support of all the Trust’s teaching staff we will continue with the completion of the £40m investment secured under the leadership of Patricia Sowter for the building of a much needed new secondary school for the area.”