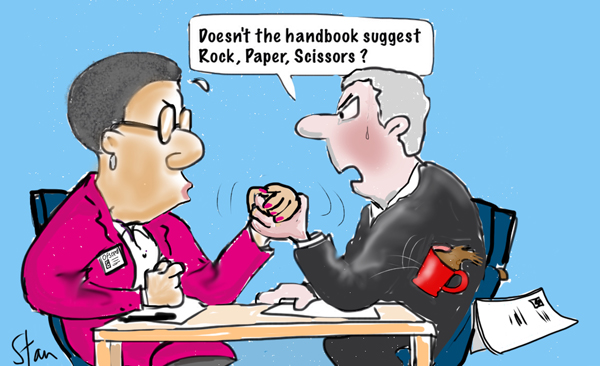 Double visits by Ofsted inspectors are to take place on the same day at schools, following an admission by the inspectorate that not enough has been done in the past to ensure the reliability of judgements.

Ofsted’s national director for schools, Sean Harford, last week acknowledged that the watchdog does not currently ensure different inspectors in the same school on the same day would give the same judgement.

Writing in response to a critical blog by Tom Sherrington, headteacher of Highbury Grove School in North London, Mr Harford said that Ofsted had plans to overcome this issue. He wrote: “I have built in reliability testing for the pilots of the new short inspections this term”.

Ofsted said: “The reliability of the short inspection methodology will be tested during the pilots by two HMIs independently testing the same school on the same day and comparing judgements.”

Ofsted said that inspectors would continue using data as a “starting point” in all inspections.

“However in reaching a final judgement, inspectors consider the information and context of a school, as shown by the full range of evidence gathered during an inspection, including evidence provided by a school.”

The watchdog was unable to give further details of the double inspection process – and it is currently unclear how the findings will be reported.

After learning of Ofsted’s intended reliability test, Mr Sherrington – who wrote the initial blog questioning Ofsted’s credibility – said he would expect there to be frankness from Ofsted about the level of reliability uncovered in the pilot.

“I would expect them to write two full reports, and to do that behind closed doors, while they get things sorted out.

“What I’d then expect is a public report, after the trial, saying what they found from the reliability testing.”

He added: “Schools in the trial must not be left without an understanding of what’s happening, or how the judgement has been decided.”

Colin Richards, emeritus professor of education at the University of Cumbria and himself a former HMI, also questioned how the two senior inspectors would approach their work.

“Would the HMIs separately inspect and compare? Would both inspectors meet the head separately? Would they inspect the same classes or different classes?”

He added: “The critics of Ofsted accept there is a great deal of professional judgement involved and they will want a system that is much more precise and replicable. I don’t think this will meet their criticisms, but it’s worth trying.”

Professor Richards described the decision by Ofsted to end contracts with its three private inspection services providers from September 2015, and to employ schools inspectors in-house as “a step in the right direction”.

Ofsted has said that, from September, it will contract with all its inspectors individually, giving it “greater flexibility and control over the inspection process”.

These in-house inspectors will be trained directly, rather than through intermediary inspection service providers.

The watchdog added: “We are confident that these measures will improve the quality and consistency of our inspection work.”