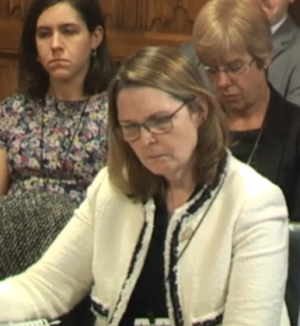 MPs have today grilled the government’s top education officials over the state of academy finances.

The parliamentary public accounts committee held a session with Jonathan Slater, the Department for Education’s permanent secretary, Mike Pettifer, its acting director of academies and maintained schools, and Eileen Milner, the chief executive of the Education and Skills Funding Agency.

The hearing was held in response to the consolidated annual report and accounts for the academies sector, which were published last autumn for the first time.

1. More academies will go into deficit

The government expects the number of academies in deficit to increase, Slater said.

He told MPs that the number of maintained schools in surplus had dropped between 2015/16 and 2016/17, and that he “wouldn’t be surprised at all” to see a similar change in academies.

Slater said some academy trusts “have not been managing their resources properly”, and that he would “expect to see an increase in the number of trusts in deficit” in 2016/17.

Despite concerns about some academy trusts having expanded too quickly, none are “too big to fail”, according to Slater.

Responding to a question from MP Gillian Keegan, he did admit that in the past some trusts “grew too big too quickly”.

3. Related-party transactions can be ‘jolly good’

According to Slater, related-party transactions (payments by academy trusts to private companies with links to people involved in the trust) can be “a jolly good thing”, as long as there is “transparency”.

Around 40 per cent of academy trusts hire firms with links to their people, but those companies are only allowed to provide the work “at cost”, so they cannot make a profit.

“Any related-party transaction for profit is not allowed and we will take action,” Slater said, agreeing to take back MPs’ concerns about such transactions and “reflect on it”.

The MPs heard that the ESFA had already written to 29 small trusts paying staff over £150,000 asking them to justify the salaries – and that two thirds had not been able to give a reasonable explanation.

Slater also said the ESFA would take direct action to reduce pay if it was found to be causing financial difficulties in trusts.

5. Almost 40 trusts have been ordered to improve their finances

According Milner, there are currently 39 academy trusts that are subject to financial notices to improve.

Such notices are issued by the government when trusts are found to have breached funding rules. Spending powers are restricted, and it can ultimately lead to academies being rebrokered to other sponsors.

Milner said the number of financial notices to improve was reducing “as trusts ask for help earlier” and because the DfE steps in earlier.

6. There was due diligence over Whitehaven Academy, but ‘things go wrong’

Slater and his colleagues faced a lot of questions over the problems facing schools in the north of England run by the Bright Tribe academy trust.

The trust’s issues came to a head last autumn when it announced it would walk away from Whitehaven Academy, a secondary school with buildings in a terrible state, and a dubious quality of education.

When asked by public accounts committee chair Meg Hillier what due diligence had been carried out when Bright Tribe took on Whitehaven, Slater said procedures were followed “but sometimes things go wrong”.

The government won’t be able to publish the next set of academy accounts before the summer recess this year because it is taking so long to verify land valuations.

The 2015/16 academy accounts were criticised by the National Audit Office last year, in part because the DfE was unable to provide “adequate evidence” about the £45 billion of academy land and buildings included in the accounts.

Today Slater admitted that efforts by the DfE to establish how much all the land on which academies operate is worth is taking “longer than hoped”. Officials have had to go over 13,000 documents, he told MPs.

It had been hoped that the accounts would this year be published before Parliament goes into recess in July, but they look unlikely to be out before October.