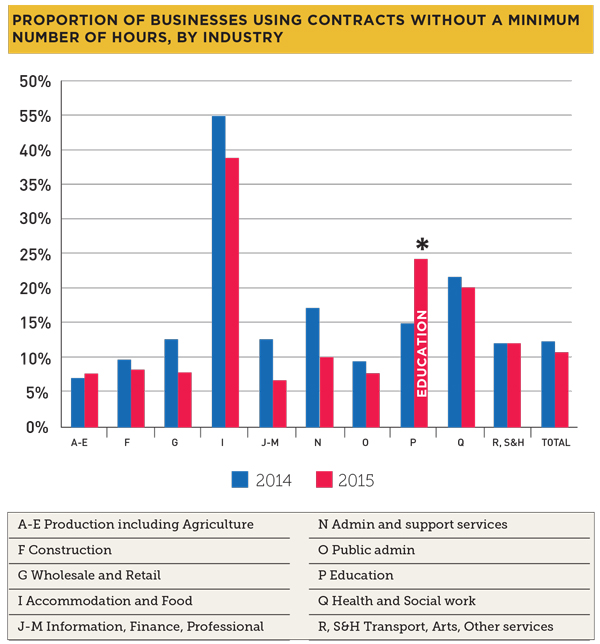 Nearly one in four businesses in the education sector employ staff on contracts without a minimum number of hours, new figures reveal.

These include the controversial zero-hours contracts that allow employers to hire staff with no guarantee of work. Former Labour leader Ed Miliband called them an “epidemic undermining family life”.

According to the figures, the use of these contracts from last January to January this year rose most significantly in education. It lags behind only accommodation and food industries in their use.

Unison general secretary Dave Prentis said: “The number of zero-hours contracts continues to grow despite the economic recovery and it’s worrying that they are being used more frequently in our education system.”

Further figures published as part of the ONS Labour Force Survey show 66,000 education staff were employed on zero-hours contracts from April to June this year. They make up about 2 per cent of the education workforce.

The majority of workers are believed to be supply teachers and ancillary workers, such as lunchtime supervisors, exam invigilators and administrators.

Mr Prentis added: “These contracts rarely offer any flexibility to workers and for many the irregular hours mean unpredictable wages. That uncertainty can play havoc with household finances.”

But they also raised concerns about supply teachers in schools – many of whom were employed on these contracts through agencies.

“There can be less professional commitment shown towards supply teachers on zero-hours contracts, by school staff and students, and little respect for the role.

“Educational development is centred around the building-up of good relationships that lead to trust. But the temporary nature and uncertainty associated with a zero-hours contract leads to a potential faultline.”

A 2014 survey of supply teachers by the National Union of Teachers found 67 per cent worked mainly for an agency, up from 50 per cent in 2010.

Agencies are free to determine their own pay levels; only 10 per cent of those surveyed said their pay was in line with rates they would get if employed directly by a school.

But the Schools’ Personnel Service, which offers specialist advice for schools, said in a post on its website that the contracts could have “mutual benefits”.

“For supply staff it means they are able to fit their teaching requirements around other commitments, sometimes working in
a number of local schools and therefore gaining wider professional experience.”

Joanne Bradbury, an associate at law firm Shakespeare Martineau, which specialises in education employment law, said no-minimum hour contracts were useful for schools that needed a bank of staff to cover at no notice.

“Schools like the idea of having retired teachers or someone who wants to step down from a full-time role and still have links with a school, and knows how the school works and how they deliver the curriculum.”

But he added: “While it is important that a workforce remains flexible, it is equally important that it is treated fairly. Zero-hours contracts cannot be used simply to avoid an employer’s responsibilities to its employees.”