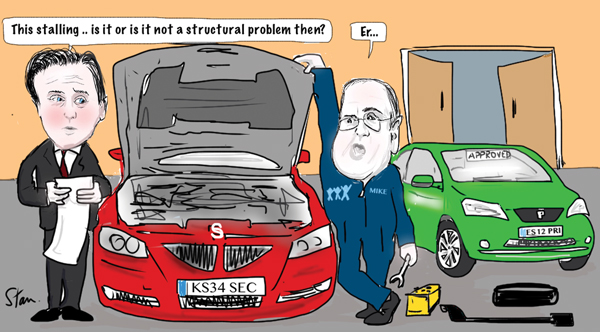 Ofsted’s chief inspector has criticised a focus on the structure of schools, despite warning that stand-alone academies are at risk of underperforming.

Sir Michael Wilshaw outlined his concerns in Wednesday’s annual Ofsted report stating that he was “disturbed” by a drop in the performance of many converter academies.

Sixty per cent of the 3,372 secondary schools in England are now academies. The report adds: “more than 2,000 academies [primary and secondary] are not part of a multi-academy trust (MAT) . . . some have become isolated. Isolation can lead to underperformance.”

The report said that of the 89 converter academies whose performance declined, 66 were not in a MAT. Of the 21 formerly outstanding schools that dropped to “requires improvement” or “inadequate”, 15 were not in a MAT.

Sir Michael said: “These figures are disturbing. We have to ask whether the necessary challenge, support and intervention for these academies have been put into place quickly enough.”

He said it was too early to assess whether the eight new regional schools commissioners, who will oversee academies, have the capacity to do so effectively.

He was also concerned about the role of local authorities. The regional report for West Midlands specifically mentioned how this issue came to the fore during inspections prompted by the Trojan Horse allegations.

“These inspections have called into question the nature and extent of the accountabilities associated with the high levels of autonomy currently enjoyed by academies. They also raise concerns about the effectiveness of the local authority to hold schools and governing bodies to account.”

At the same time, however, he urged people to move away from a focus on school structures.

“The time has now come to move away from the debate that has raged for the past five years about school structures and towards a sharper focus on what works in all schools, regardless of their model or status.

“The essential ingredients for success are no secret and have been well documented from time immemorial: strong leadership, a positive and orderly culture, good teaching and robust assessment systems.”

In support of his view, Professor Alice Sullivan of the UCL Institute of Education said: “There is no robust evidence that any particular school structure or type -— such as academies, free schools, faith schools — is beneficial for improving the performance of poor pupils.”

Gabriel Heller Sahlgren, research director at the Centre for Market Reform of Education, said: “There is evidence to suggest becoming an academy can mean better results for pupils, but only among schools that were LEA-maintained prior to conversion.

“In addition, the research findings only apply to schools, mainly in disadvantaged areas, which became academies under the previous Labour government’s scheme.”

Headline figures from the report showed that primary schools are improving, with a three percentage point increase in the number of good or outstanding schools to 82 per cent. This compares with 71 per cent of secondary schools, a figure that has remained the same and was described by Sir Michael as having “stalled over the last year”.

Ofsted has now inspected a third of all free schools, making it “too early” to judge their overall performance.

Sir Michael Wilshaw is keen to point out secondary schools improvements have “stalled”.

The chief inspector is correct, even if only on the basis that Ofsted’s annual report shows the proportion of secondary schools graded good or outstanding has remained unchanged at 71 per cent.

But what caught our eye were the contradictory solutions.

Sir Michael says now is the time to stop debating the pros and cons of different school structures.

Yet, his own annual report criticised the structure of stand-alone academies, who become “isolated”, leading to underperformance.

Ofsted is therefore, in fact, promoting a particular school structure for academies: the multi-academy trust (or MAT, as it is known).

This message is likely to be welcomed by the government, who will use their new regional schools commissioners to move under-performing stand-alone academies into MATs.

Therefore, changes to school structures will continue to play an important part in the government’s approach to intervention.