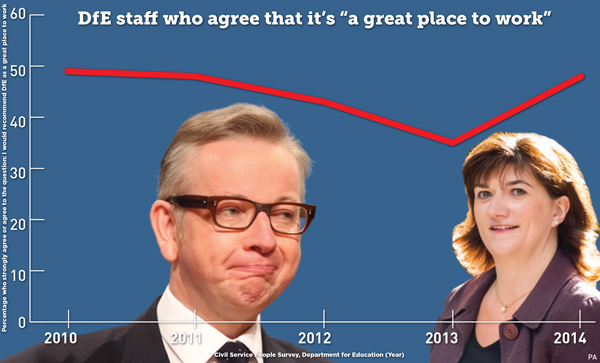 Morale is bouncing back at the Department for Education following the end of a “particularly unpleasant era” when Michael Gove was at the helm.

In the last 12-months, during which time the controversial government minister was replaced by a less divisive figure, DfE staff satisfaction as measured by the civil service staff survey has increased dramatically.

Compared to previous years, the number of civil servants who said they would recommend the DfE as a “great place to work” has leapt by 13 percentage points .

The increase ends a five-year consistent fall in the proportion of staff answering that the central department and its associated civil service bodies were a great place to work.

The share of staff now recommending the DfE as a workplace sits close to the civil service average of 49 per cent. Over the past five years, figures across the wider civil service increased, but consistently declined at the DfE.

Pride in working for the DfE – 46 per cent last year, well below the civil service average – also increased by 12 percentage points this year, up to 58 per cent.

Positive responses to leadership and change management also increased significantly, up to 42 per cent from just 32 per cent last year.

The results come in the wake of the July departure of a secretary of state who promised to cut the number of staff in his department by approximately a quarter.

Commenting on the findings, a spokesperson for PCS, the union representing non-managerial civil servants, said: “It is welcome to see some light returning to the DfE but it’s important to recognise this was from a very low base and there needs to be far more engagement with staff and us.

“It is not entirely surprising that this comes following the departure of Michael Gove. His time as education secretary was a particularly unpleasant era in the history of this department, which he and his advisers used as an ideological test-bed for the more outlandish and dangerous ideas of how the civil service should be run.”

Michael Gove’s removal from office in David Cameron’s July reshuffle was largely unexpected, and came after four years of huge reform. His replacement, Nicky Morgan, has been seen as a safe pair of hands, appointed to win back support for the Conservatives ahead of next year’s general election.

Commenting after the release of the survey results, a DfE spokesperson said: “Our staff survey shows that Department for Education staff are more motivated and engaged than before — results have improved in every category over the past 12 months.

“Staff are particularly happy with their team and their work, while there are many other positives including our results on inclusion and fair treatment.

“However, we are not complacent and will work to address other areas highlighted in the survey.”

The annual civil service staff survey was carried out in October, and had a 95 per cent response rate for the DfE group.