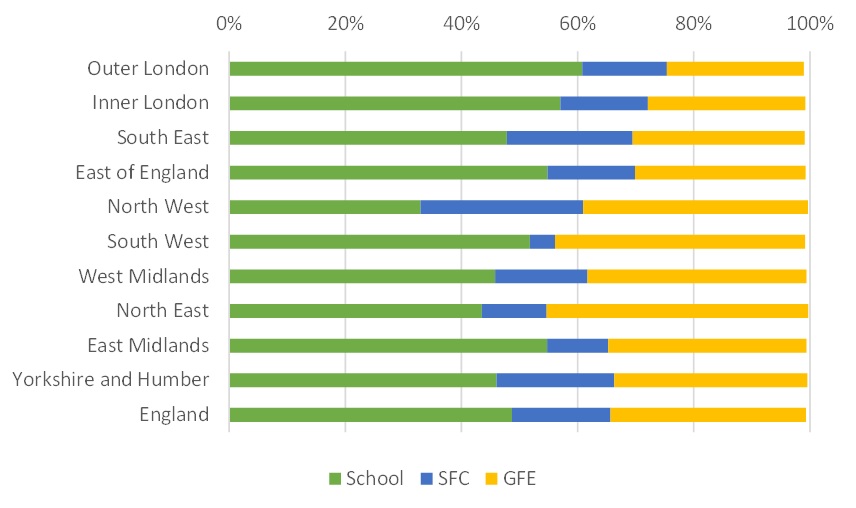 Analysis by Education Datalab’s chief statistician Dave Thompson, based on children who completed GCSEs in 2011, found that pupils at secondary schools without sixth forms were less likely to get places at Russell Group universities.

A possible reason for this is that pupils who attend sixth form or further education (FE) colleges are not entered for as many academic qualifications or ‘facilitating subjects’ – those the Russell Group say keep students’ options most open.

His findings show less than half of pupils at sixth form colleges were entered for a facilitating subject. This compares to more than 60 per cent of pupils at school sixth forms.

In certain regions, this discrepancy is compounded by differences in post-16 provisions.

In the north-west of England, for example, Mr Thompson found that fewer pupils study at schools with sixth forms.  In the area, the highest proportion of pupils attend sixth form colleges for 16-19 year olds.

Completion rates also differ regionally, with Outer London pupils completing studies  at a rate of more than 70 per cent compared to less than 60 per cent in the midlands, north east and Yorkshire & the Humber

According to the data there is a 13 percentage point difference in the likelihood of completing three or more ‘academic’ A levels in a school sixth form versus a college. This gaps drop to 6 percentage points after approximately controlling for factors such as deprivation and ethnicity.

Mr Thompson admits that it is possible other pupil characteristics could be driving the difference. Further analysis is needed to rule out this possibility.

He said: “There is variation between regions and local areas. I am not saying whether that is a good or bad thing, but more questioning whether we are happy with this? Is this fair? Especially as things are going to change given the funding cuts the FE sector is facing.”

The analysis used data based on all pupils in state-funded mainstream schools who completed GCSEs in 2011.