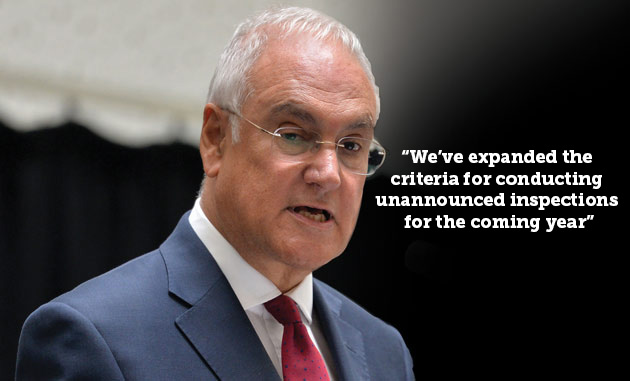 Ofsted announced today it is to “mount a wave” of no notice inspections this month in light of the Trojan Horse scandal in Birmingham.

HM Inspectors are to visit about 40 schools across the country for two day inspections during a two week period this month.

Schools are currently given half a day’s notice before Ofsted inspections but Chief Inspector Sir Michael Wilshaw has now agreed to look at a system of inspecting all schools without notice.

Sir Michael revealed the plans for unannounced inspections after the Trojan Horse investigation – an alleged plot to infiltrate schools in Birmingham by Islamists.

No notice inspections for all schools were first mooted by the Department for Education in 2012 but it was withdrawn by Ofsted after Sir Michael said teachers objected to the plans.

Today’s announcement widens powers to undertake no notice inspections  if there are concerns about rapidly declining standards, safeguarding and behavioural issues, standards of leadership or governance, or the “breadth and balance” of the curriculum.

Ofsted said many of the schools were already scheduled for visits this term but others will take place in light of concerns being raised.

Sir Michael said: “Parents rightly expect Ofsted inspections to get to the heart of any problems that may exist in a school – whether they are to do with discipline, safeguarding, poor leadership or governance, or a narrow, unbalanced curriculum. That’s why we’ve expanded the criteria for conducting unannounced inspections for the coming year.

“I’m currently giving thought to whether Ofsted should move to more routine no notice inspections as part of our wider education inspection reforms, which we will be consulting on later this year.

“In the meantime, under our regional structure, inspectors are well placed to use their local knowledge and contacts to identify where these sorts of problems may be taking hold so we can respond swiftly and report publically on what we find.”

Responding to the Ofsted announcement the National Association of Head Teachers (NAHT) general secretary, Russell Hobby, said: “Ofsted already has the power to conduct a no notice inspection where there is risk or concern and this is sufficient.

“Routine no notice inspections demonstrate a profound lack of trust in school leaders.

They will also paralyse the self-improving school system, making it difficult for heads to spend time out of their schools to help improve standards.”

In the same announcement, Ofsted also confirmed they have returned to five Birmingham schools which were placed in special measures during the Trojan Horse investigation.