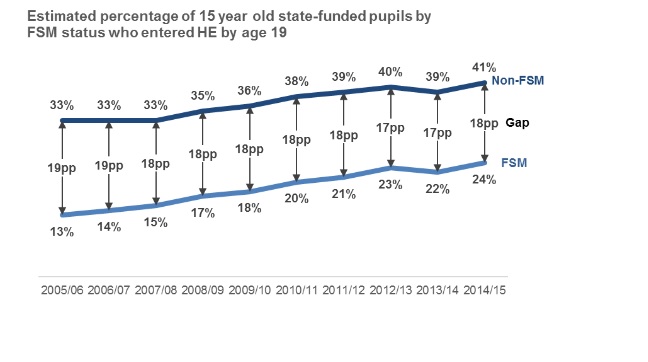 The gap between poor pupils and their richer peers gaining a place at university has increased, a new study has found.

Widening participation in higher education figures published today show that 24 per cent of pupils on free school meals went on to study at university in 2014-15.

That compares to 41 per cent of non-free school meal pupils – meaning the gap between the two is 18 percentage points.

However the statistics also show that the overall percentage of free school meal pupils gaining a place at university is actually at its highest ever level.

But the gap between free school meal pupils and their peers has only closed by one percentage point in that time.

There has also been a rise in the gap between private and state students who go on to study at the most selective universities.

An estimated 65 per cent of students who took A-level and equivalent qualifications in private schools and colleges went on to the most selective universities in 2014-15.

That compared to 23 per cent of students from state-funding schools and colleges.

Today’s figures, however, show the gap for private and state students going on to study at all universities has closed by one percentage point.