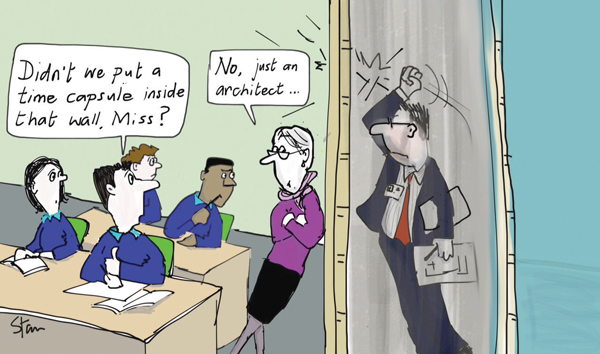 Two academies have been given millions of pounds to build walls back into their open-plan classrooms after claims they were causing attainment to plunge.

Bexhill High Academy, in East Sussex, and St Aldhelm’s Academy, in Dorset, are believed to have been handed about £7 million from the government to redesign their buildings this summer.

Both have been taken over by new academy trusts after falling into special measures.

Schools Week understands the schools were classed as “exceptional cases” by the Department for Education and will receive the cash amid fears pupils’ attainment would not improve unless action was taken to alter classroom design.

Bexhill High Academy has £6 million to rebuild parts of the school, just five years after its £38 million building opened.

Tom Attwood, chairman of Attwood Academies, which runs Bexhill, said: “The people of Bexhill, and more particularly the children of Bexhill, have in recent years been let down badly by an ill-thought out building design and, worse, a dreadful implementation of the new-build.”

The design was inspired by the Swedish concept of Kunskapsskolan, which focuses on flexible and personalised learning for pupils.

Pupils learnt in 15 open-walled classrooms, dubbed “education pods”, hailed as bringing “innovative teaching” to the community. Ninety pupils could fit in each.

The building was funded mostly from the Government’s Building Schools for the Future programme, with £4 million from East Sussex County Council.

But the school fell into special measures in 2012 and was taken over by Attwood Academies last year.

The academy immediately switched to teaching pupils in smaller classes, which Ofsted said was helping pupils to make better progress.

A monitoring inspection report from January reads: “Students were unanimous in saying the new arrangements help them to focus better and get on with their work.

“But they rightly note that on too many occasions, learning is hindered by the sound of the group working next door, which cuts across class discussion and/or teachers’ questioning of students. This is frustrating for students and is slowing them down.”

Work will start on creating “traditional acoustic” classrooms for 30 pupils in the summer.

St Aldhelm’s opened in 2012 after a £9.8 million redevelopment, hailed as equipping the school for “21st century modern teaching”.

After being put in special measures in December last year, Ambitions Academies Trust stepped in – immediately tearing up the open classrooms.

On its website the trust said the “vast open-plan classrooms made it impossible for students to concentrate”.

Temporary walls have already been installed and building work for more permanent changes is due to start in June.

It has been reported that the school needed £1 million for the work.