Academy trusts handed a share of £31 million under government funding to expand were “overly ambitious” in some cases, while others were worried over “financial viability” despite being given cash to expand, a report has found.

The government has today published an evaluation of its regional academy growth fund, a £31 million pot of cash dished out to 350 trusts in 2016-17.

The evaluation, by CooperGibson Research, stated the growth of trusts was commonly between one and three schools. Schools Week reported last year that not all trusts given the funding had actually expanded.

Despite the extra funding, the report also found a small number of MATs were concerned about financial viability in the “longer-term”. This included in cases where they had taken on schools with large deficits or where they had not grown as much as anticipated.

The report stated that budgeting and financial strategies would need reviewing in cases where growth had not happened as anticipated.

But researchers found that some trusts, that applied for money on the basis they would take on three or more schools in 12 months, actually had “overly ambitious” plans for growth.

The report stated one trust had taken on 10 schools.

In these cases, the government changed the key performance indicators to “better reflect school improvement and building capacity and expertise so as to enable growth and sustainability in the future”.

Other trusts were judged against their growth.

Respondents to the research also stated the 12-month period to demonstrate the impact of the funding was not long enough.

600 trusts applied for the funding – meaning 250 missed out on the cash. Some trusts were also given less than they applied for, which resulted in some not growing as much as anticipated – although this was down to a “range of reasons”.

However one trust stated it was closing, in part because of their lack of success in obtaining growth funding.

The cash was split into three different streams, to support sponsors working with underperforming schools, help multi-academy trusts grow, and for trusts to set up new hubs.

The fund has since been superseded by the £53 million MAT development and improvement fund. 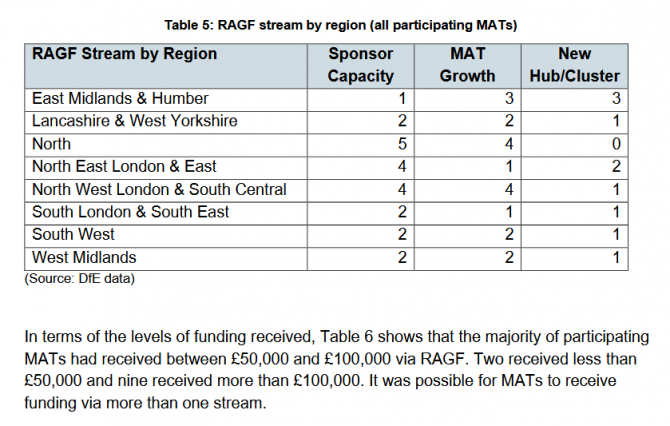