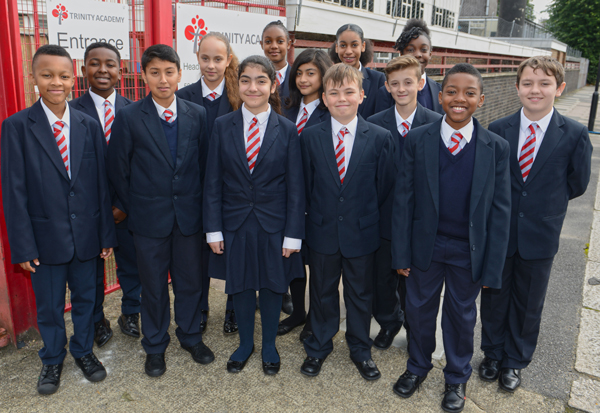 After revealing last year that a new free school in south London had opened with only 17 pupils, Schools Week goes back to Brixton’s Trinity Academy to find out how many bums are on seats for its second year.

Schools Week didn’t get a warm welcome last time we were at Trinity Academy.

When the free school refused to tell us how many pupils it had last September one of our reporters stood outside the gates and counted how many kids went in.

The figure of 17, on a school site that had cost £18 million, made our front page and was later picked up by other national media.

A year on and the school has swelled to 83 pupils, close to the maximum of 100 that can fit inside its temporary building.

And welcoming us through the school gates – with an offer of tea and biscuits – is headteacher Ben Thompson, who speaks enthusiastically and passionately about the future.

“It’s a massive percentage increase for us, but we wouldn’t have got that if parents had not come down and spoken to my fantastic staff and pupils.” The school is reliant on those staff as its temporary home is anything but inspiring.

Classes are currently held in a small and slightly downtrodden building on the site of Lambeth College’s Brixton campus, bought for £18 million by the Department for Education.

But if all goes to plan, a sparkling new building will be ready for September 2017, when a shortfall of places in the area is due to kick in. The site will also house the college campus and a university technical college.

“We have kids coming to our school and parents going across to the college to learn English,” Mr Thompson says. “This is going to be great for Brixton.”

The current building was confirmed only three weeks before the school was due to open last year, an uncertainty that Mr Thompson (pictured right) says put off many parents.

“Last year was difficult and it had quite a few disadvantages. But the small number of pupils allowed us to get things right.”

The school’s founding principles centre on a personal education, with a rule of no more than 25 pupils per class. “Routines and practices were put in place ready to scale up as our numbers grow,” Mr Thompson says.

The school received funding for double the number of pupils last year – something Mr Thompson is quick to point out wasn’t its fault.

The extra money, which will be clawed back by the government over the coming years, is untouched. Mr Thompson says that a constant eye for savings – for instance, sharing services with the neighbouring college – helps them to get by. “It’s been tough money-wise, but we’ve managed.”

Tough might be the best word to describe Mr Thompson’s first year. The low pupil numbers prompted criticism from Labour MP Chuka Umunna and from Lambeth Council, which said a near-empty free school does nothing to achieve the best education for the area’s children.

This year, when approached by Schools Week, local councillor Imogen Walker said she was unable to comment.

“It was unfair to have these distractions and the children have been caught up in things that aren’t our doing,” Mr Thompson says.

“We just went into a bunker mentality and said let’s get our heads down and think about the children with all this going on around us.”

It seems to have worked. The pupils are immaculately behaved during my whirlwind tour of the five classrooms, and talk about their school with confidence and a smile on their face – something we couldn’t have seen from outside the school gates.