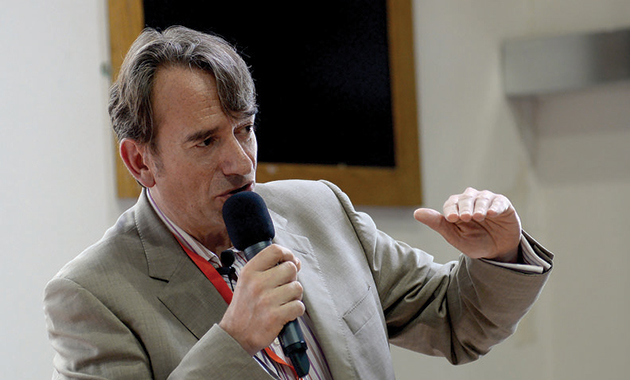 Educationist Martin Robinson emphasised the importance of a balance between tradition and innovation.

Speaking at Saturday’s conference, Mr Robinson (pictured) gave the audience tales of how research could improve thinking, but should also be treated with caution.

He said: “What’s the relationship between undermining authority and research? For me, it’s about tradition. And research belongs to the sort of dialectical world, so in trivium [grammar, dialectic, and rhetoric] terms, one undermines the other.

“Look at Twitter, how much of that is about using research to undermine things? It’s about saying ‘well this is actually true’ and ‘your school shouldn’t be doing that’.

By worrying about small targets, backed up by evidence, you lose the picture of the whole.

“What happens to that teacher? Do you embrace them and say ‘great teacher, well done for finding that out and by the way we have thought of a great place for you to go to do some research for us – it’s called the Outer Hebrides – and we would like you to visit there for some time to perhaps to look at whether to set up a school there’. Do you silence the possibility of someone coming up with something that can undermine the institution?”

Mr Robinson, the author of Trivium 21c and an experienced teacher, explained how scientific research into such things as diet was constantly adapting, and how the “perfect weight” could mean different things – but the sensible outcome to being healthy was to adapt a common sense approach.

He said: “Everything is part of something larger. By worrying about small targets, backed up by evidence, you lose the picture of the whole. You can’t see the wood because you are obsessing about one tree.

“So, the dilemma in your school – do you want backward, docile teachers accepting dictats of management or rational-minded teachers accepting the universality of reason but likely to become prevaricating upstarts ready to undermine their leaders? If you want a rational profession, a school, which is quite an irrational place, might start to quake somewhat. Think about it. What is rational about a school?

“And any school that has moved, via headlines, and changed its way of working over time, whether it has gone down the ‘Brain Gym’ route or the ‘multiple intelligence’ route it is likely to be as confusing to someone who is trying to do their weight by the BMI . . . it might be measuring the wrong things, it might be reactive to anything trying to get things right.

“The pursuit of reason might actually destroy the strength of the school. That doesn’t mean you shouldn’t have reason. But the reason should be part of the conversation of the school. It shouldn’t be the only thing the school follows.

“So, one of the things you need to know is reason and the forces of reason are a journey towards truth. They are not truth itself. And the same with tradition, and the same with all the unmeasurable things.”