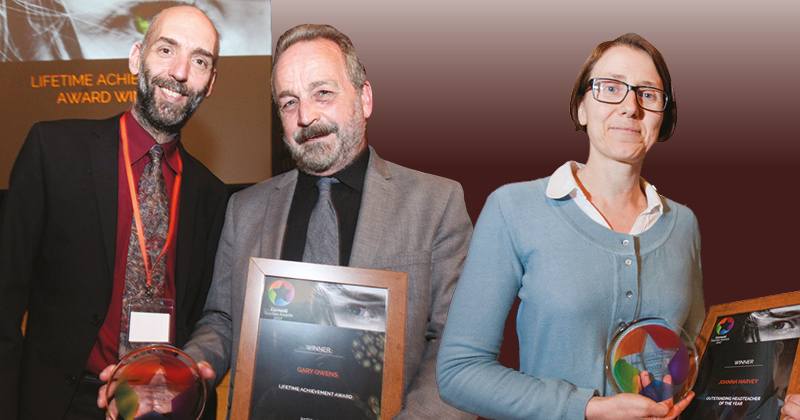 Hosted at Truro Cathedral, the event recognised educators across 13 categories, with accolades such as the lifetime achievement award, outstanding school, outstanding headteacher and governor of the year.

The lifetime achievement award went to Gary Owens (pictured centre), principal of Acorn Academy in Penzance, for the “positive impact” he has made in the schools he has worked in.

The judges said every school “needs a teacher like this”.

Joanna Harvey (pictured right) of St Dennis Academy won the outstanding head award for her “resilience and fundamental commitment to raising standards, building a team and ensuring there is fun and excitement in learning for all pupils”.

Now in its second year, there were nearly 300 nominations for the awards, with 37 teachers, governors and support workers making it to the shortlist.

Keynote speaker at the event was Shane Mann, managing director of LSect and publisher of FE Week and Schools Week. Speaking at the awards, he praised the work of educators in the area, saying “Cornish teachers turn around children’s lives.”