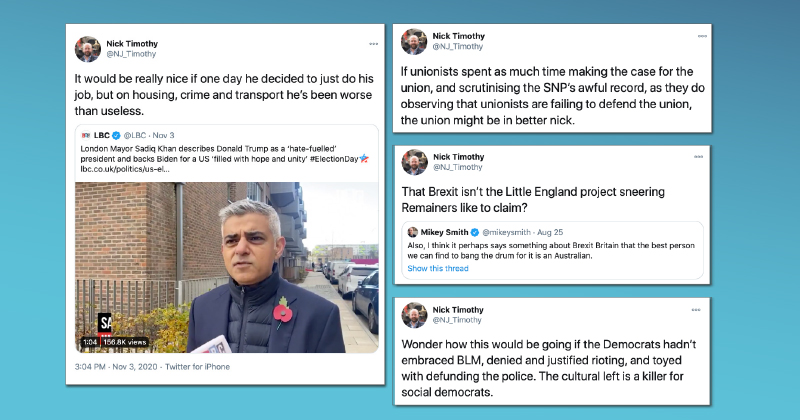 Department for Education board member Nick Timothy has been accused of breaching impartiality rules over tweets expressing partisan views and criticising opposition parties.

The former chief of staff to Theresa May and New Schools Network director was appointed as non-executive director at the DfE in March.

Schools Week revealed last month that his appointment was rushed through without competition at the behest of education secretary Gavin Williamson, a close ally of Timothy’s.

Cabinet Office guidance on the code of conduct for board members of public bodies states that all postholders “should be, and be seen to be, politically impartial”.

But Timothy, an outspoken newspaper columnist who has previously failed in a bid to become a Conservative MP, has posted dozens of tweets in recent months that either specifically criticised other political parties or made his own political views clear.

In one instance he claimed that “much of the Labour Party is rotten” and in another he referred to “sneering remainers”. Another tweet accused the Scottish National Party of having an “awful record”.

“It’s clear where his political loyalties lie from that sort of tweet, and that creates a problem,” he told Schools Week.

“Non-executive directors in government departments and other public bodies and agencies are very much on the administrative, civil service side of the equation, whereas politicians, ministers, special advisers and even tsars to a certain extent are on the politics and policy side.”

The DfE would not say whether Timothy would face action for the tweets, despite having recently reminded teachers of their own duty to be impartial in new guidance on relationships and health education.

On October 31, responding to a tweet from MP Claudia Webbe, who currently has the Labour whip suspended, Timothy said: “Just like a Halloween movie trailer, just when you thought it was safe to even consider the Labour Party.”

Timothy has also sent a number of tweets attacking London mayor Sadiq Khan. On November 3, Timothy responded to a video of Khan criticising Donald Trump, saying: “It would be really nice if one day he decided to just do his job, but on housing, crime and transport he’s been worse than useless.”

It wasn’t just British political parties that Timothy spoke out against. On November 4, following the preliminary results of the American presidential election, Timothy tweeted: “Wonder how this would be going if the Democrats hadn’t embraced BLM, denied and justified rioting, and toyed with defunding the police. The cultural left is a killer for social democrats.”

The episode has also prompted concerns about what is seen as a wider politicisation of public appointments. One recent example is criticism of the decision to appoint Tory peer Dido Harding to head up the government’s test, track and trace system.

The website Conservative Home recently put out a call for Conservatives to put themselves forward for public roles, with a non-executive directorship at the Department for Transport highlighted as a suggested vacancy.

It also comes after a number of high-ranking civil servants were reportedly forced out by the government. Jonathan Slater, the DfE’s former permanent secretary, was told to go in September, months ahead of schedule.

Steve Barwick, deputy director of the Smith Institute think tank, said it was “paradoxical, insincere even, that the government all too readily complain about ‘political’ civil servants but then appoint their own supporters to roles that are covered by the rules of impartiality and say nothing when they tweet in a partisan fashion”.

He also called for the government to “restate its commitment to impartiality and update the civil service code” to clarify its position.

However, he said the rules were “pretty clear”.

“It seems therefore that if Nick wants to express his robust opinions, and of course I would defend his right to do so, he really should have thought twice before taking on the role of NED at the Department for Education.”

Timothy did not want to comment. The DfE, despite repeated attempts, did not respond to a request for comment.