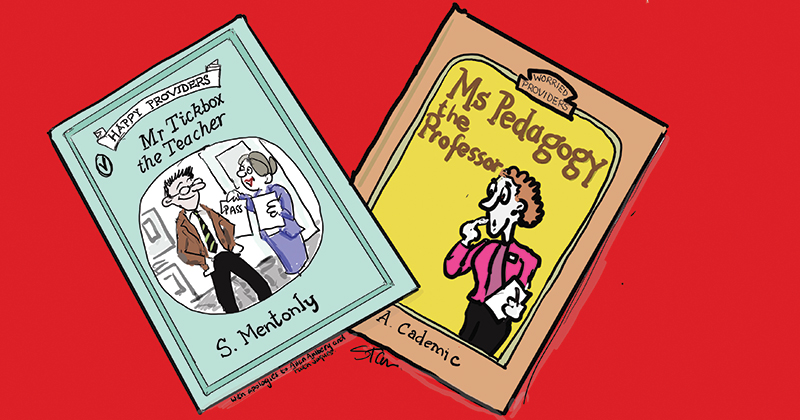 The number of teachers gaining qualified status (QTS) through an “assessment-only” route – involving about four hours of lesson observation and no further training – has more than doubled in the past three years.

A Freedom of Information request reveals that the number of teachers passed by providers has risen from 429 in 2013 to 912 last year.

The Department for Education (DfE) launched the assessment-only route to becoming a qualified teacher in 2009, initially for experienced teachers in the independent sector or for teachers trained overseas wishing to gain a UK recognised qualification. But experts say that unless Ofsted “rigorously” checks providers, this could be qualification “by the back door”.

Alan Smithers of the University of Buckingham says the increasing importance of qualifications in the independent sector, as well as uncertainty in further education, could explain the rapid growth of the assessment-only route.

“As the name suggests, it is assessment-only, without any training. I would not be concerned if it is being inspected rigorously. I would be concerned, however, if it is becoming a relatively soft way into teaching and a cash cow for the assessors.”

Providers who spoke to Schools Week, including private companies, said that they made no profit from delivering the assessment-only route.

Several charge extra if applicants have a third-class degree – or if they do not have a degree, but have an A-level

However, financial arrangements differ. Several charge extra if applicants have a third-class degree – or if they do not have a degree, but have an A-level, in the subject they will qualify to teach – but do not provide additional training.

e-Qualitas, a private company delivering teacher training in the south that signed-off 13 qualified teachers in 2013-14, rising to 28 last year, charges the applicant’s school £2,500, plus VAT.

About 30 per cent of applicants to the assessment-only route are rejected or redirected along other training routes each year – with about 100 per cent of those accepted passing their assessment, a spokesperson for e-Qualitas told Schools Week.

Two hours of lessons are observed in an initial visit to see if a candidate should be accepted, and their portfolio of evidence reviewed. For that initial assessment and associated costs, e-Qualitas invoices the school £750.

Following the candidate’s acceptance, the remaining fee is invoiced and a further two hours of observations as well as interviews are undertaken, according to the spokesperson.

Educate Teacher Training, a private company operating training hubs across the country, qualified one teacher in 2014 and four teachers last year through the assessment-only route. It charges £2,675, plus VAT, and a “non-refundable” deposit of £200 for the assessing interview.

While all applicants must have worked in at least two school settings under government rules, the length of their experience can be set by providers – in the case of Educate Teacher Training “a minimum of three years’ teaching experience is required”.

Bedfordshire Schools Training Partnership SCITT charges £3,000 for each applicant, while the University of Worcester charges £2,250, as well as additional charges.

The university, for example, charges a 45p a mile petrol fee if an assessor has to travel more than 40 miles to an applicant’s school, and £300 if applicants “do not have a specialist degree in a subject we offer”.

Samantha Twistleton, director of the Sheffield Institute of Education, said: “If it’s simply a way of validating expertise that exists and aids recognition, then it’s valid. If it’s a backdoor way to get people in, then that would be a worry.”

She said all teachers should have academic training in pedagogy: “For me there is the importance of showing you can write, research and reflect on practice as well as show professional competence. Most countries in the world agree with me.”

Assessment-only course providers are judged by Ofsted to make sure they are of the highest standard, meaning only the best teachers end up in our classrooms

While all initial teacher training providers must be rated good or outstanding to deliver the assessment-only route, Schools Week found Educate Teacher Training was ranked as “satisfactory” in one category at its last inspection in 2012.

Titan Initial Teacher Training, a private company based in Birmingham, also said Ofsted “asked about our assessment-only route programme”, but confirmed the route was not featured in its final inspection report.

Ofsted told Schools Week that where ITT providers offer an assessment-only route to QTS, they will be inspected against the assessment-only criteria – specifically, criterion A3.4, “that rigorous moderation procedures are in place to assure the reliability, accuracy and consistency of assessments of candidates against the standards for QTS”.

Yet since assessment-only routes operate in a 12-week window, that period may not coincide with an inspection, Schools Week was told.

A spokesperson for the Department for Education said: “Like any route into teaching, assessment-only course providers are judged by Ofsted to make sure they are of the highest standard, meaning only the best teachers end up in our classrooms.”