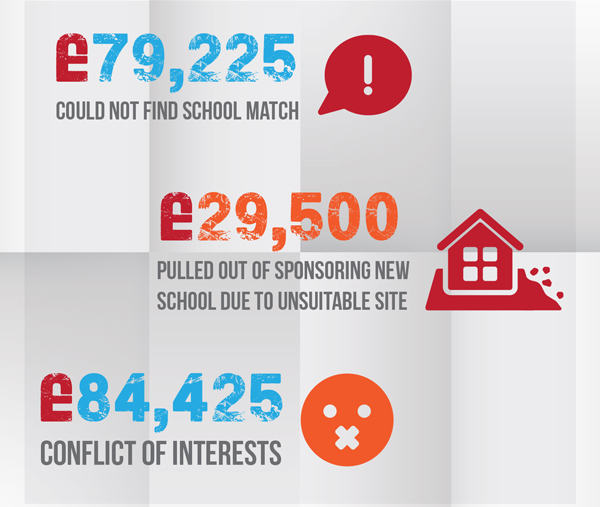 At least 17 academy trusts handed a slice of £7.2 million to take over struggling schools have yet to do so — more than a year later.

A freedom of information request by Schools Week has revealed the government handed out one-off payments of up to £100,000 to 144 organisations in the 2013-14 financial year to help prepare for the takeover of new schools.

However, an analysis of the trusts shows several are yet to take over a single school, although they have been given cash totalling at least £850,000.

Janet Downs of Local Schools Network, a campaign group that supports locally maintained schools, said: “It seems a reckless use of taxpayers’ money if the Department for Education (DfE) gives academy trusts cash to expand and it is then not used for the purpose intended.

“It is particularly careless if the DfE awarded the money before it decided whether the trusts were suitable sponsors.”

The cash was handed out under the sponsor capacity grant that makes one-off payments, usually between £50,000 and £100,000, for expenditure that includes expanding organisational structures, legal costs and IT infrastructure.

A DfE source said all of the organisations were assessed and found to have the potential to be great sponsors, but some had not found the right school to make a match.

There is no definite list of how many trusts are yet to take over a new school, but web searches and a Schools Week analysis of the government’s “open and planned” academies found at least 17 that did not appear to have taken on a single school.

The National Youth Agency (NYA) was handed £79,225 with the intention of providing high quality education and curriculum expertise for youngsters
whose needs could not be met in mainstream education settings.

The money was used to set up a new body, the NYA Academy Trust, and to develop an alternative curriculum, put together a business proposal and prepare bids for pupil referral unit takeovers.

However, the NYA said that while it submitted bids in Nottingham, Lincoln and Sheffield, all were unsuccessful for different reasons.

Avec Partnership, a company providing specialist support to schools in the north east, have been given £84,425 to set up the North East Schools Trust (NEST).

Sarah Monk, director of Avec Partnership, said: “We have recently informed the regional schools commissioner that NEST no longer intends to remain as a sponsor and as a result repaid the sponsor capacity grant awarded.”

.A third group, The St Bonaventure Trust, was created by the Northampton Diocese to form a multi-academy trust that would take over under-performing groups of schools, but is yet to do so after all schools in its sights improved.

Durrington Multi-Academy Trust pulled out of sponsoring a new secondary school in Worthing, in Sussex, last year after being given £29,500.

Sue Marooney, headteacher of Durrington High School, said the proposed site for the school was “unsuitable to deliver our vision” and raised concerns about the school’s budget and unrealistic opening time. But she said the trust still intended to expand in the future.

A DfE spokesperson said: “Sponsor Capacity Funds support sponsors to build their capacity to take on and turn around failing schools so that they are ready to do so when the need arises. The vast majority of sponsors who have received the fund now sponsor schools.

“All spending of sponsor capacity fund grants must be approved by us and we will seek to recoup unspent funds.”

The department did not respond to a request to provide examples of where the money had been recouped.