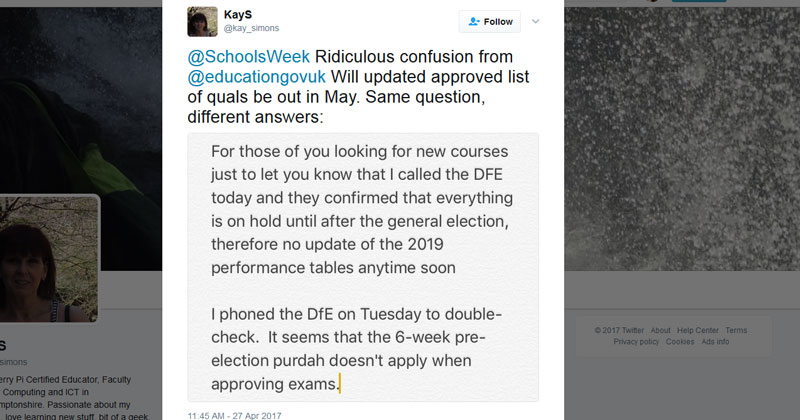 The Department for Education has given teachers conflicting messages about when an approved list of 2019 technical and vocational qualifications will be finalised, leading many unable to prepare their courses.

The approved list of qualifications, which can count towards performance tables, was meant to be updated in March, but some qualification bodies are still waiting to find if their subject has made it through.

Last updated in February, the government dropped the controversial European Computer Driving Licence from future league tables, although many pupils were already signed up to the qualification.

Pupils on other courses also could find their results do not count in league tables if the updated list is not published soon. Teachers have said they are being chased by their senior leaders about whether courses are going ahead, but “can’t answer them”.

The government might now delay the list until after the general election with the fate of several qualifications in ICT still hanging in the balance.

An email exchange seen by Schools Week between an exam board and the qualification reform team within the Department for Education (DfE) showed that civil servants acknowledge the list should have been updated in March.

It said the published list was now expected “early in the summer term” with a final update due in August.

Facebook and Twitter messages posted by teachers claim the DfE has told some of them the list will be published before June 8 as election purdah did not apply to approving exams.

A qualifications expert told Schools Week that purdah should not stop the government from publishing the list, as approved qualifications did not count as a policy document.

But a spokesperson for the DfE said no fixed date could be given for the list’s publication, saying it would arrive “in due course”.

Kay Sawbridge, head of computing and ICT at Caroline Chisholm School in Northamptonshire, said she had “the senior leadership team on her back asking what ICT course we’re going to do, and I can’t answer them”.

Courses in ICT for exams bodies OCR, AQA, TLM and CIDA were all waiting to hear if courses had been approved or not, she said.

“It is unacceptable to be asked to prepare courses you don’t know are going ahead.”

Chris Keates, general secretary of the teachers’ union NASUWT, said the reform of qualifications had been “characterised by short timescales” that gave schools little preparation time.

She said the delay to the updated list was another example of teachers getting information about qualifications “late in the day”.