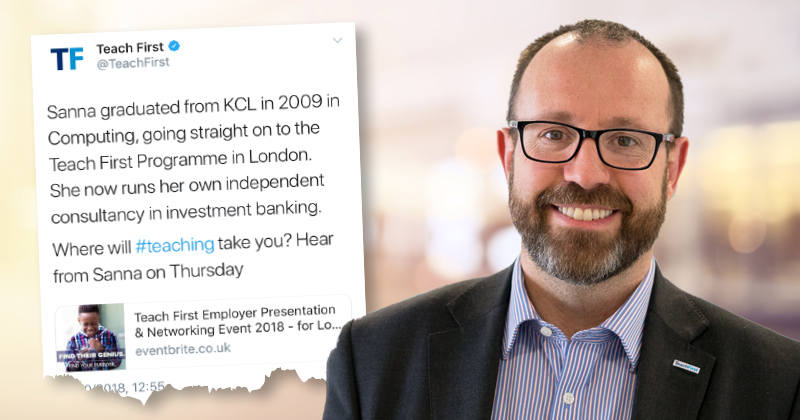 Teach First has revealed it will launch a new push to get qualified teachers back into the classroom amid criticism for a new advertising campaign that promoted how one of its graduates had gone on to work in investment banking.

Teach First chief executive Russell Hobby tweeted about three new schemes – including one targeting returner teachers – in response to complaints over a tweet that told how graduate Sanna had qualified with Teach First and ended up in investment banking consutancy.

Stuart Lock‏, executive principal at Advantage Schools in Bedford, said it was an “appalling line to take”, labelling it “nonsense about going into teaching as a stepping stone”.

Teach First has been criticised for the dropout rates of its graduates, and the tweet comes amid recruitment and retention problems in the sector.

Hannah Wilson, an executive headteacher at Aureus School and Aureus Primary School, added that “marketing like this really does not help”.

Teach First apologised for the tweet, saying it “wasn’t the right message”, adding: “Some [graduates] will do other things but we want more of them to thrive and want to stay.”

Hobby, in a tweet, stated: “Let me make clear: teaching is an end in itself, not a means to some other end. And we want to work with colleagues across the system to create the conditions where as many people as possible can stay.”

During the fall out the charity’s chief executive also confirmed the charity is launching three new projects, which Schools Week understands will be unveiled next month.

Hobby said they focus on getting teachers who have left the classroom to return to teaching, creating career pathways for Teach First graduates after two years, and a teaching assistant fast track initiative to “find the talent in the local community”.

Teach First refused to provide any further information about the projects.

But it follows findings reported by Schools Week in July that teachers trained by Teach First when it launched 15 years ago are increasingly returning to the profession, after leaving it behind to try out different industries.

The government has also trialled a scheme aimed at persuading former teachers to return to the classroom, and find the “best approach to supporting teachers who have taken time out of their careers”.

Sanna graduated from KCL in 2009 in Computing, going straight on to the Teach First Programme in London. She now runs her own independent consultancy in investment banking.

Where will #teaching take you? Hear from Sanna on Thursday https://t.co/FhftbUZjyk

However others defended the tweet from the charity, which targets “high-end graduates” to pull in people who normally wouldn’t apply to become a teacher and widen the pool of recruits.

Rachel Gooch, a school governor, suggested Teach First, in its response to the tweet, had “internalised the criticism it gets to the point where there is nothing distinctive about it”.

“Or is it that competing at the top of the graduate recruitment market wasn’t the best strategy in the first place?”

Teach First candidates are only required to commit to teaching for the duration of their two-year training programme.

Figures published in 2016 showed 80 per cent of the charity’s graduates were in teaching for the year after QTS, however the retention rate dropped to 55 per cent in the second year after QTS, and down to 43 per cent for year three.

Nick Hassey, a researcher and former analyst at Teach First, said the charity’s adverts “should be pitched at those who aren’t sure about teaching for life and therefore trying to ‘widen the pool’.”

“Otherwise they’re just re-directing people *who would already want to teach* into a more expensive route. This is really obvious.”

A spokesperson for Teach First said they had nothing further to add.