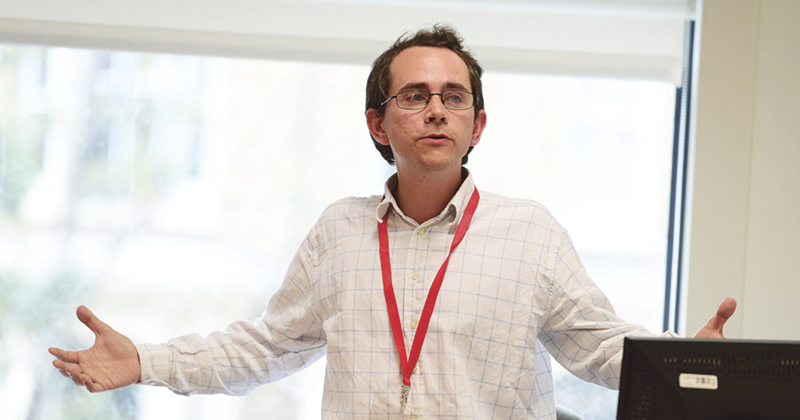 Teach First is to replace its current programme with a two-year postgraduate diploma (PGDE), giving its paid participants two thirds of a master’s degree and leaving them more qualified than those who fork out up to £9,000 to do a university-based Postgraduate Certificate of Education (PGCE).

Graduates with the charity currently spend a year doing a PGCE, which is worth 60 points towards a master’s degree, and then spend their second year developing leadership skills.

But from 2017, all trainees will complete a two-year PGDE, leaving them with 120 points towards a master’s, a move that Teach First claims will make it easy to “top up” to the higher degree.

The new scheme will be officially unveiled at the ResearchEd conference tomorrow by Sam Freedman (pictured), Teach First’s executive director, who told Schools Week the changes were the culmination of “years studying the research and listening to feedback from participants, schools and universities.

“We know the first two years are the most critical to career and leadership development. Ultimately we wanted to ensure our participants are equipped not only with the practical skills they’ll need in the classroom to make a real impact, but are also supported to develop as leaders who can tackle educational inequality . . . ”

Teach First, the UK’s largest recruiter of graduates, placed 1,685 trainees into schools in 2015. Participants are paid throughout their two-year course during which they commit to teaching in schools with a high number of deprived pupils.

The plan has been cautiously welcomed by James Noble-Rogers, executive director of the Universities Council for the Education of Teachers, who said he wanted teaching to become “a fully master’s-verified profession.

“In principle I fully endorse linking teacher education programmes to master’s level qualifications. Moving towards a PGCE over a two-year period could be a positive development.”

Founded in 2002, Teach First is now responsible for about 6 per cent of all new teachers in England each year, but has faced criticism over the relatively high cost per trainee compared with other initial teacher training (ITT) routes.

A study by the Institute for Fiscal Studies released in July found the average cost of ITT for a Teach First trainee was about £38,000 compared with £17,000 for an undergraduate primary degree. The average of all routes was about £23,000.

The charity’s name and ethos have also been controversial, and the organisation has sought to debunk myths such as “the idea that it’s for career-hungry people who do this for two years and then see it as a stepping stone to a different life”, as Freedman told The Guardian in 2014.

The new scheme will be the first two-year PGDE course in England, and contrasts with other pioneering routes to qualified teacher status.

Schools Week revealed in July that academy chain heavyweights, including Ark and Oasis, were exploring a “unique partnership” to found a new higher education institute that would train expert teachers. And an investigation in January revealed a group of schools in Buckinghamshire and the West Midlands working on plans for an apprenticeship route to QTS, which will be submitted this month for further government approval.