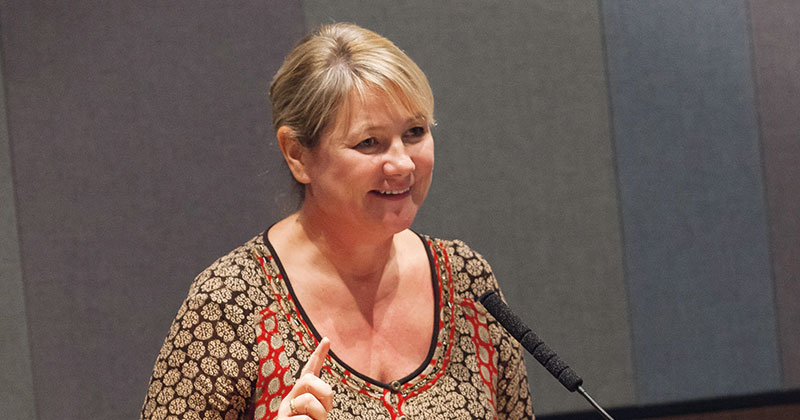 Debra Kidd says pupils are primed for national exams, which is why they struggle in tests such as PISA.

An “atomised” curriculum that does not allow for transferable knowledge explains the country’s poor performance in international education league tables, said Dr Debra Kidd (pictured), an author and former teacher.

She told delegates that English pupils struggled to transfer the knowledge they learnt for national exams into different kinds of tests, such as PISA, because of a focus on assessment formats and subjects being kept separate.

Pupils were taught to treat knowledge as valuable mostly within the context of an exam rather than having worth in its own right, a process that she labelled “cognitive dumping”.

Knowledge gained for a test in one context is not transferring into other tests. That might explain our performance in PISA

Citing a study by Wylie and William in 2006, Kidd told delegates: “Knowledge gained for a test in one context is not transferring into other tests. That might explain our performance in PISA and other tests.

“We use this language that primes their brains for a sort of cognitive dumping. You are priming their brains when you say ‘you need this for the exam’ so they feel they don’t need it for anything else.”

Kidd, who taught in primary, secondary and university settings, said rather than dividing the curriculum arbitrarily by subject, learning should involve greater “novelty” since evidence suggested that discovery and awe made the brain receptive to learning.

“We have to stop thinking in terms of atomised objectives of learning and in wider concepts of ideas. Where is the beauty in maths? Where is identity in geography?

“A pupil might be doing a task where they’re doing maths and they’re using DT at the same time. They’re thinking really, really deeply about the kind of world they live in – that’s what needs to be driving that curriculum forward.”

Her comments follow warnings from artists, scientists and employers against a “narrow” school experience based around written tests rather than creativity and skill.

Some 57 per cent of businesses believe a lack of soft skills such as communication are the reason pupils and graduates are ill-equipped to find good work, according to a 2014 survey by the British Chambers of Commerce.

Meanwhile, the uptake of creative arts subjects has declined, with a 50 per cent drop in GCSE entries for design and technology, 23 per cent for drama and 25 per cent for other craft-related subjects between 2003 and 2013, according to a report by the University of Warwick released last year.

There was a risk of a “two-tier” system where only the most advantaged pupils had access to a wide range of experiences, said the researchers.

Kidd argued for a moral purpose to be returned to the curriculum, stating that the International Baccalaureate’s focus was her favourite.

Its mission, which Kidd quoted, said: “The IB aims to develop inquiring, knowledgeable and caring young people who help to create a better and more peaceful world. These programmes encourage students across the world to become active, compassionate and lifelong learners who understand that other people, with their differences, can also be right.”

The English Baccalaureate, introduced by the government in 2010, has been promoted by schools minister Nick Gibb on the grounds that: “A rigorous academic curriculum is the way to overcome educational disadvantage […] and secure a good job.”