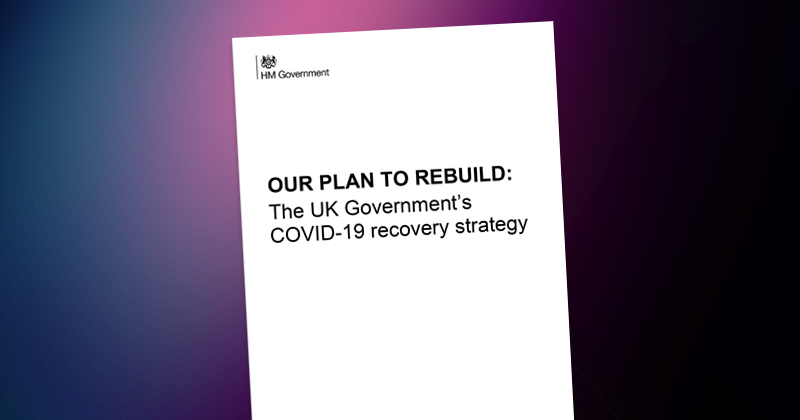 The government has published its coronavirus “recovery strategy”.

There’s very little by way of detail for schools, and further education-specific guidance is expected later today. But here’s what we know.

The rate of infection remains “too high to allow the reopening of schools for all pupils yet”, the document states. Schools are currently open only to vulnerable pupils and the children of key workers, but attendance has been low.

The strategy states there’s a “large societal benefit from vulnerable children, or the children of critical workers, attending school”.

Under ‘phase one’ of the government’s plan, which comes into effect on Wednesday, local authorities and schools are being told to “urge more children who would benefit from attending in person to do so”.

However, the document also states that modelling by the SAGE group of scientists shows full reopening of schools will “lead to a resurgence of the virus and a second wave that could be larger than the first”.

2. Ambition for all primary pupils to go back before summer…

Under phase two of the plan, the document states schools should prepare for a “phased return”.

As was already announced, this is reliant on the government’s five tests being met. But it would include, from June 1, reception, year 1 and year 6 pupils going back in “smaller sizes”.

“This aims to ensure that the youngest children, and those preparing for the transition to secondary school, have maximum time with their teachers.”

The document adds that it is the government’s “ambition is for all primary school children to return to school before the summer for a month if feasible, though this will be kept under review.”

The DfE will “engage closely with schools…to develop further detail and guidance on how schools should facilitate this”.

3. …but no full reopening of secondary schools this year

Again, no further details on this point. The document just states: “Secondary schools and further education colleges should also prepare to begin some face to face contact with year 10 and 12 pupils who have key exams next year, in support of their continued remote, home learning.”

That suggests the full reopening of secondary schools won’t happen until the new academic year.

A new biosecurity centre of epidemiological expertise will be set up and have an “independent analytical function”.

It will identify specific actions to address local spikes in infections, for example advising “ministers businesses and local partners to close schools or workplaces where infection rates have spiked, to reduce risk of further infection locally”.

In addition to overall “COVID-19 secure guidelines for workplaces”, the government has promised to consult on and release “similar guidelines for schools, prisons, and other public spaces”.

A FAQs document published by the Cabinet Office, states schools can operate “if they are organised in a way that is compatible with minimising the spread of the virus”.

The “next phase” of measures required the development of new safety standards for how physical spaces, including schools, can be adapted to “operate safely”.

“We will publish guidance advising schools on reopening to ensure schools can adequately prepare for the next phase. One of the main protective measures we can take to reduce transmission is to have small consistent group and class sizes.”

5. Those travelling to school just told to ‘think about when they travel’

Schools are worried about how pupils will be able to get to school, including whether buses will still be operating and how pupils can social distance on them.

The document contains little information, apart from advising those who need to travel, including to school, to “think about how and when you travel”.

However it does state that ministers are looking at “more stringent enforcement measures” over non-compliance of rules, similar to other countries.

This includes imposing higher fines to “reflect the increased risk to others of breaking the rules as people are returning to work and school. The government will seek to make clearer to the public what is and is not allowed.”

The government is now advising people that they should aim to wear a “a face-covering in enclosed spaces where social distancing is not always possible and they come into contact with others that they do not normally meet, for example on public transport or in some shops”.

But face coverings should not be used by children under the age of 2 or those who “may find it difficult to manage them correctly, for example primary school age children unassisted, or those with respiratory conditions”.

A FAQ document also states that pupils won’t be compelled to wear face coverings in schools, adding: “We will publish further advice on protective measures in schools in the coming weeks.”