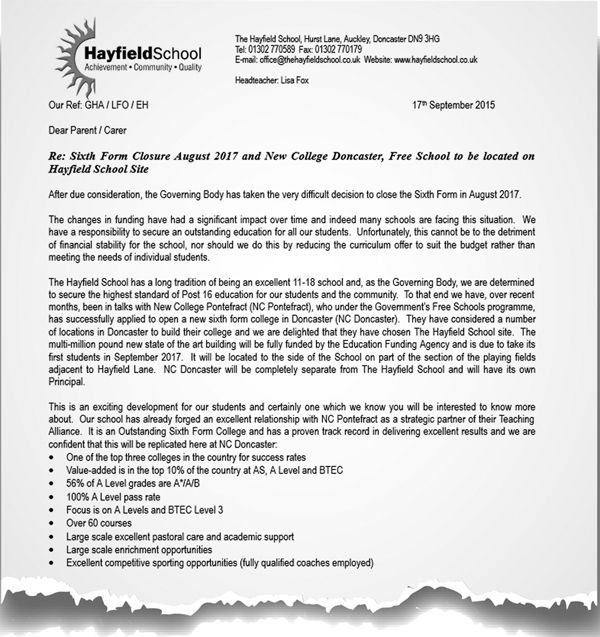 A Doncaster school is closing its sixth form as a new free school college prepares to open on the same site.

Hayfield School told parents it will close its 200-pupil sixth form in August 2017, raising fears that more schools could follow suit – and prompting questions about its relationship with the new college.

Staff said the decision was made because of the “significant impact” of funding changes.

In the same letter, the school announced that New College Doncaster – a new 1,200-pupil free school for post-16 education – will open just a month later in a multi-million pound building on the same site.

Ian Stevenson, regional secretary of the National Union of Teachers’ Yorkshire Midland region, said: “It seems to me this is not about educational standards or provision – it’s about changing the structure of education to replace a sixth form with a free school.

“Behind this is the government trying to achieve its policy pledge and get another 500 free schools.”

New College Doncaster was founded by New College Pontefract – which Hayfield School described as a strategic partner in its teaching alliance.

Schools Week revealed last year the college was offering high-achieving students a £500 incentive to sign up.

The letter goes on to list the “proven track record in delivering excellent results” of the Ofsted-rated outstanding New College Pontefract, and invites parents to briefings and open days with its headteacher Pauline Hagen.

Parents were told the Hayfield governing body was “determined to secure the highest standard of post-16 education for its students and community”.

It said the college opening was “an exciting development for our students” which parents would “be interested to know more about”.

But some parents of pupils at the school have asked Caroline Flint, the MP for Don Valley, to look into the closure. It is understood they are concerned about links between the two establishments.

The letter adds: “We realise that not every student will want to attend New College Doncaster and therefore we remain committed to ensuring that all students get impartial advice and guidance to progress to post-16 education or training where it is right for them.”

The school is believed to have agreed to close its sixth form before any decision on New College Doncaster opening on the same site was made. The site was deemed to be the most cost effective choice in the region.

The Department for Education said it did not want to comment.

Concerns also have been raised that the sixth-form closure could be followed by more.

“Sixth-form colleges feel the impact of 16 to 19 cuts most acutely, but schools are not immune – the root cause of all of this is a chronic under-investment in 16 to 19 education, something that seems likely to get even worse as a result of the spending review.”

But he welcomed the establishment of a new standalone college. It has been set up under the free school mechanism but is a sixth-form college in all but name.

“One of the biggest advantages of having a sixth-form college is that it’s going to have specialist teachers who teach that particular age group,” Mr Kewin said. “It will also have the economies of scale.”