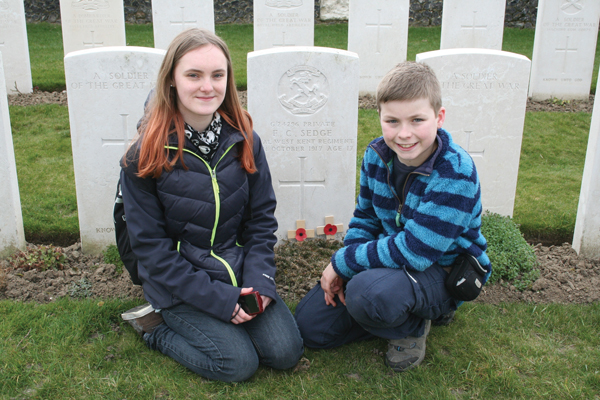 More than 72,000 names are etched across the giant columns of the Thiepval Memorial in northern France.

Each remembers a Commonwealth soldier who lost his life during the Battle of the Somme.

But Leonie Hunt solemnly gazes at just one as she wipes away a tear: Harold George Moore, a rifleman in the London Regiment. Her grandad’s uncle. Clutching a bundle of papers containing the few details she could find on the internet about Harold, the 14-year-old is now just metres from his final resting place.

As another tear falls, classmate Meshach Shadares puts an arm around her. The pair stand in silence, remembering the war to end all wars that took place 100 years ago on the same ground they now stand on.

There were about 450,000 casualties on The Somme, one of the bloodiest battles on the Western Front during the First World War.

With the warmth of the crisp spring sun filling the air, Leonie gathers her thoughts and leaves a message from her family on a small cross next to Harold’s name. “A brave man to a loyal family, rest in peace.”

“I’m the only person to visit him from my family,” she says. “It’s hard to explain how I felt, but it was emotional.

“People must have loved him, as a brother, an uncle. But they did not get the chance to remember him at his memorial, so it would have been quite hard.”

The pupils, from Ormiston Rivers Academy, in Essex, were two of 52 from 26 Ormiston academies who spent four days this week visiting museums, battlefield sites, memorials and cemeteries in Belgium and France.

The trip is part of the First World War Centenary Battlefield Tours Programme, set up with funding from the Department for Education and Department for Communities and Local Government, to promote a deeper understanding of the Great War.

By March 2019, two pupils and a teacher from 4,000 secondary schools will have visited the front.

But the real work starts when the pupils return home, under the Legacy 110 Project. They are encouraged to share their experiences with at least 110 people – so spreading their personal stories across their communities.

Jugjit Chima, national education coordinator at the Institute of Education, which provides the programme alongside educational tour company Equity, says:
“We’re here on a mission to take this back. These pupils are two ambassadors, chosen to spread the word.

“Some are writing blogs, speaking on their local radio, doing presentations in other schools. We want to reach five million people.”

Leonie and Meshach will share their stories through a drama presentation. Treeve White, from Cowes Enterprise College, in the Isle of Wight, will share his through local media.

The 12-year-old based his project on under-age soldiers in the war, after being inspired by his great-great-great grandad’s story.

While helping his granddad move house earlier this year, he stumbled across an old box in his attic that contained his relative’s war medals.

“I found out he had ran away to join the army when he was just 14,” he says. “But he got found out and sent back home.”

Treeve also discovered the story of a 14-year-old soldier who died in the war, and another 17-year-old – F C Sedge – who was buried in Tyne Cot Cemetery, which we visited on Monday. Through online research back in the UK, Treeve finds the teen’s burial location. He stands in front of it, remembering. “In memory of your bravery and loyalty to your country,” his message reads.

The endless rows of pristine white headstones at Tyne Cot glisten in the early afternoon sun. It is the largest Commonwealth war grave site, with 11,954 soldiers buried here.

Treeve and Leonie later represent the group at a wreath laying at the Last Post Ceremony, in Ypres, Belgium.

The buglers of the Ypres volunteer fire brigade have gathered under the Menin Gate at 8pm every day since 1928 to play the Last Post. Standing in the cobbled road under the huge arch, the evocative notes of the final salute to the fallen reverberate from the walls.

A yellow glow from the inside lighting illuminates the imposing arch. Those under its walls remember in silence. John Dickens at the entrance to the Tyne Cot Cemetery

“For me to represent everybody here is an honourable thing,” Leonie says.

The tour also takes in the Langemark Cemetery, a German war grave site, Neuve Chapelle, a memorial for Indian, Pakistan and Bangladeshi soldiers, and Pheasant Wood cemetery, where Australian soldiers are remembered.

Driving through the now picture-pretty, sleepy villages dotted around the rolling hills, it is difficult to comprehend that just 100 years ago it was the centre of a bloody battlefield, a sea of sludge.

The red-brick mud was the only way pilots could tell there once were villages here.

A well-known war memorial inscribing reads: “when you go home tell them of us and say: for your tomorrow we gave our today”.

The touching and inspiring stories brought to life on this trip will ensure the legacy lives on.

To find out more, visit www.centenarybattlefieldtours.org

Main pic: Sophie Downton and Treeve White from Cowes Enterprise College at the grave of a young soldier they had researched