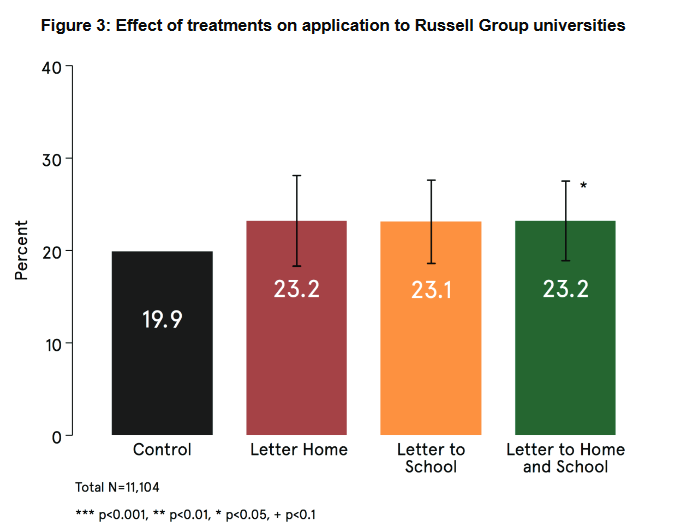 Students are more likely to gain a place at the country’s top universities after being sent letters from role models urging them to “aim higher in life”, a major new study has found.

The Department for Education has today published the findings of a three-year study run by the Behaviour Insights Team – known as the ‘nudge unit’ – aimed at encouraging pupils to attend university.

The letters explained important factors when deciding which university to attend, including that employers care which institution you attend, and that more selective universities can be cheaper for students from poorer families.

Letters are effective both at boosting aspiration, and getting students to act

Some pupils got one letter, some got two, and others didn’t receive any letters.

Receiving both letters also boosted a student’s chance of receiving and accepting an offer from one of the top universities, which rose from 8.5 per cent (no letter), to 11.4 per cent (two letters).

The report stated: “Overall, it seems reasonable to conclude that these letters are effective both at boosting aspiration, and getting students to act on this aspiration.”

More than 11,000 students across 300 schools took part. Students had to have scored more than 367 points on their best eight GCSEs, and went to schools that typically sent more than a fifth of their high-achieving students to the nearest university.

The letters were sent during the students’ first year of sixth form.

The letters were printed on Department for Education headed paper, and emphasised facts thought to be important when deciding which university to attend.

Outcomes were tracked through UCAS applications up to two years later.

While the trial found students weren’t more likely to apply to university overall – it was estimated an additional 222 students accepted places at a Russell Group university as a result. Raj Chande, one of the researchers, told Schools Week: “Widening participation at our most competitive universities is essential if we are to improve social mobility, so we’re delighted with the results of this trial.”

He added: “This is an extremely cheap intervention and we look forward to discussing how we can scale this up and repeat it with universities and others.”

The report stated next steps could include sending letters from more specific role models, letters better targeted to pupils’ own needs or identity, or letters to other people in the student’s network.

Schools Week reported in January the department was recruiting a team of “behavioural insights” experts to aid ministers in their policy decisions.

The move is aimed at changing the culture of the department with psychology specialists applying behavioural science from the start when new policies are developed.