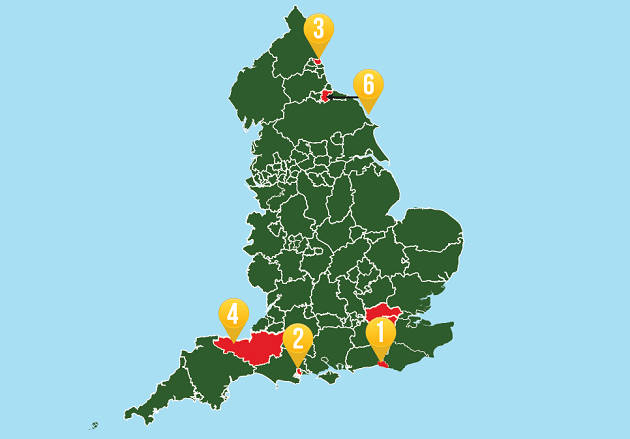 There was more stability this year with about a third of authorities managing to better their results.

Provisional figures released by the Department for Education (DfE) show a slight increase nationally in the attainment of five A*-C grades,

including English and maths, up by 0.2 percentage points to 56.1 per cent in state-funded schools.

There are, however, some standout areas.

Schools in Brighton and Hove recorded a 6.1 percentage point increase, by far the best in the country. They were followed by Poole, North Tyneside, Somerset, Tower Hamlets and Stockton-on-Tees. All are geographically and demographically very different.

Contrary to last year, the GCSE results in the top six most improved councils were above the national average; Tower Hamlets had the best overall result of the six with 63.4 per cent of pupils achieving the benchmark.

The data shows a huge 16.6 percentage point drop in Hammersmith and Fulham, west London. A council spokesperson told Schools Week the government data did not record the results of one school that had skewed figures. It says its figure of 49 per cent passing GCSEs, including English and maths, should be 62 per cent. This would mean a smaller drop of 3.6 percentage points.

Detailed results for individual schools have yet to be released and are expected in January.

To understand why results have improved in these six authorities, Schools Week contacted each council, plus headteachers in their areas, to ask what had boosted their GCSE results.

Dorothy Stringer School in Brighton has 12 forms of entry and more than 1,600 pupils – a challenge in terms of pastoral care.

Headteacher Richard Bradford points to the school’s work with Challenge Partners, a school-improvement organisation that has a hub in Brighton, as a turning point. Almost all local secondary schools are involved.

“It has been key to changing the school’s attitude, and that’s quite deep down. We want to make our pupils happy in the school and not just focus on the C/D borderline. We have a huge range of extra-curricular options – sport, music, drama. That all helps to engage our pupils.”

The DfE highlighted the success of academies in this year’s results, but Brighton has just two academies and one free school.

Mr Bradford says there has been no divide between the school “types” and they continue to work together.

Results in Poole have steadily increased over the past five years, after a dip last year was attributed to the decision to only record pupils’ first attempt at exams.

Schools in the authority are now up to a similar level to 2013.

Councillor Mike White, Poole’s cabinet member for children and young people, says there is still more to do, but they are “committed” to “rapid improvement”.

“It is tribute to the commitment and skill of school leaders and teachers in many schools that results in Poole have improved.

“The council and all school leaders know we have much more to do to ensure all young people in Poole, and particularly those who are disadvantaged, achieve their full potential.

“All schools and the council are, therefore, working together to achieve further improvements in outcomes in the coming and subsequent years.”

Schools in North Tyneside face an array of challenges – deprivation, the area’s poor health profile, and a coastal location.

“We have a number of challenges across the region and locally. I think despite that, we all have a real ambition for children,” says Jacqui Old, director of children’s services.

She highlighted work at schools, such as Churchill Community College in Wallsend, that included an outreach programme for parents to change their attitudes towards schooling, and pointed to Monkseaton High School in Whitley Bay that had “absolutely focused” its attention on data and performance

She says a number of schools have also been working much harder with their feeder primaries to improve transition.

In the past the authority has had problems getting strong leadership teams in place.

The distance between rural secondary schools in Somerset makes working together more difficult than in other areas.

The rural nature of the county has also affected teacher recruitment, but schools have come together to create “families” to work on staff professional development.

Simon Faull, project director of the Somerset Challenge, which has worked in partnership with Teach First on ways to improve recruitment, as reported by Schools Week last month, says: “I don’t think there is one thing that you can point the finger and say that is the magic thing that’s made the difference.”

Mr Faull, who is also part of the Somerset Association of Secondary Headteachers, adds: “Peer reviews are part of the work schools have been doing together to boost performance.”

So this year schools and the local authority “carried out a detailed, open and honest analysis of the previous year’s results” in order to improve, the council says.

It points to three schools with marked improvements: Bishop Challoner Boys (21.6 per cent increase in the numbers reaching the benchmark), Langdon Park (15.6 per cent) and Swanlea School (14.8 per cent).

“At some schools across the borough, there has been a significant focus on numeracy and literacy. There has also been emphasis on tracking and monitoring, and then using this data generated to target specific students,” says a spokesperson.

Partnerships between heads of departments and subjects, as well as between schools, had also contributed to the increase.

Focusing efforts on the transition of year 6 pupils into year 7 has been a key component of steadily improving results in Stockton.

GCSE results have gone up year-on-year since 2010, apart from last year’s blip that most local authorities experienced.

This year results are the highest they have been for five years.

Councillor Ann McCoy says: “When they come up from primary we want to maintain that progress, because we were quite concerned as to what was happening in those first six weeks.”

The schools have what is called a “transition guarantee”, which aims to support children when they start secondary school.

“There used to be more of a disconnect between the secondaries and the primaries and in some cases the secondary sector did not understand the achievements made at the end of primary school,” Ms McCoy says.