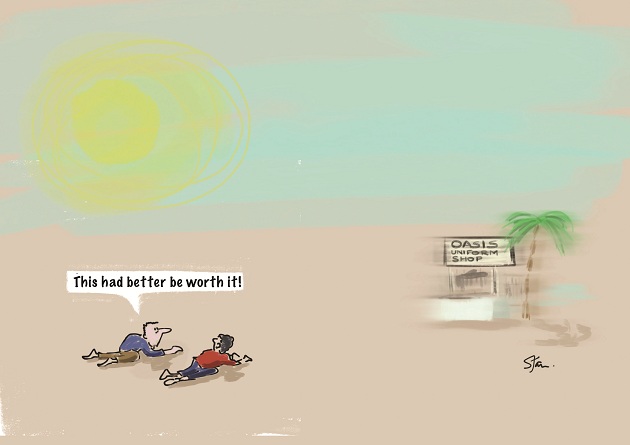 Schools are still insisting parents buy uniforms from exclusively appointed suppliers, despite government advice and a letter from the Competition and Markets Authority (CMA) urging against it.

Schools Week asked the 20 largest multi-academy trusts (MATs) to provide details on their uniform policies but almost all remained silent.

However, online searches revealed that some academies within Oasis Community Learning – one of the largest MATs – only allow parents and carers to buy uniforms directly from the school. At least 12 other Oasis academies gave details on their websites of their uniform supplier.

Weald of Kent girls’ grammar in Tonbridge, given the go-ahead by the government last week to build a new “satellite” school nine miles away in Sevenoaks, says on its website that certain uniform items “must be purchased” from a named local retailer.

The school said it did not wish to comment.

School uniform guidance issued by the Department for Education (DfE) in September 2013 stressed that school governing bodies should give “high priority to cost considerations”.

It emphasised that pupils or their families should not be left “feeling unable to apply to, or attend, a school of their choice, due to the cost of the school uniform”.

The Grey Coat Hospital, a Church of England comprehensive school for girls in Westminster, central London, says on its website that John Lewis/Peter Jones is “the official school uniform outfitter”.

The website includes a link to John Lewis, with prices including a grey blazer for £80, and £40 for a box pleat skirt.

Oasis Academy Oldham only permits uniform to be bought from the academy. The average total cost for the compulsory items of a boy’s uniform – not including trousers – is £71.50.

Oasis Academy Isle of Sheppey sells branded items from its school shop and says on its website that only PE items purchased directly from the academy will be allowed for year 7 students in this academic year.

A spokesperson for Oasis Community Learning said: “Uniform standards are important for us, but having a strict uniform policy does not mean it has to be expensive. Each school has autonomy over their uniform policy, but they are asked to do it in a way that’s mindful of the communities they work in.

“The number of branded items is quite minimal – and when an academy recommends a retailer it’s usually where a discount has been negotiated.

“If we did something that created a cost barrier on entry we would have failed on one of our core values of inclusion.”

The CMA’s letter called on headteachers and governing bodies to prioritise affordability. It has also urged them to review any exclusive arrangements with suppliers “with a view to ensuring that future school uniform policy looks to drive competition between suppliers and retailers”.

Gillian Allcroft, deputy chief executive of the National Governors’ Association, said governing boards should make “every effort to keep uniform costs to a minimum and make sure it is as widely available to purchase as possible”.

Websites of three schools operated by TKAT, one of the largest academy trusts in the south of England, also named just one uniform stockist although they did not state if the arrangements were exclusive.

A spokesperson for TKAT said: “Approaches to uniform are decided at individual academy level and we don’t dictate what they can and can’t do.”

The CMA letter said any long-term exclusive arrangements between schools and suppliers may break competition law and could be investigated formally.

A spokesperson for the Schoolwear Association said in response: “If a school decides on a sole supplier arrangement, we strongly recommend periodically putting contracts out to tender.”