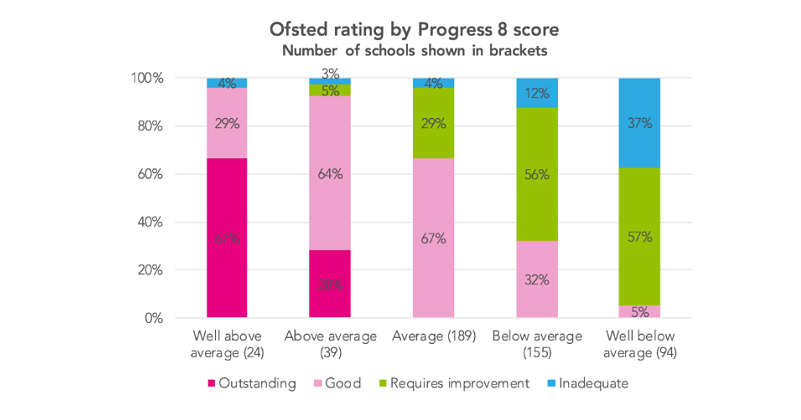 Schools with “well below average” progress scores were more than nine times more likely to be rated inadequate as those with average or above-average progress last year, new research shows.

A joint study by Education Datalab and the Association of School and College Leaders found a “strong relationship” between schools’ progress 8 scores and their inspection ratings.

It comes as Amanda Spielman, the chief inspector of schools, prepares to announce that exam results will no longer be the key focus of Ofsted inspections, having admitted earlier this year that progress scores don’t “paint the whole picture” of school quality.

Ofsted came under fire earlier this year after its own data revealed that schools in the most affluent areas are more than twice as likely to be rated ‘outstanding’ as those in the most deprived, leading to accusations of bias against the poorest schools and an over-reliance on performance data.

‘Outstanding’ ratings were also concentrated among schools with “well above average” progress 8 scores. Sixty-seven per cent of these schools received the highest possible Ofsted rating, which was also awarded to 28 per cent of those with “above average” scores.

The research suggests that those with “average” progress 8 scores, as defined by the government, “won’t get ‘outstanding’ ratings, for example, bar very exceptional cases”.

“Our analysis suggests historical data is still a key determining factor in inspections,” said researchers Philip Nye and Steve Rollett in a blog.

“However, there is evidence of Ofsted’s intention to change inspectors’ relationship with data.”

Spielman will say today that “for a long time, our inspections have looked hardest at outcomes, placing too much weight on test and exam results when we consider the overall effectiveness of schools”.