The charity Stonewall has condemned the actions of pressure group Transgender Trend in publishing a set of stickers on its website which promote messages such as “kids shouldn’t be taught in school that they can choose to be a boy or a girl”.

The stickers, which director of Transgender Trend Stephanie Davies-Arai‏ recommended to put “all over your pencil case”, also state “teenagers are coming out as transgender after social media binges”.

Another states “children confused about their sex usually grow out of it”, while one asks “do you know what is being taught in your child’s school about gender identity?”

A spokesperson for Stonewall, which campaigns for the equality of lesbian, gay, bisexual and trans (LGBT) people across Britain, said the stickers contribute to “an environment where the bullying of trans students can flourish”.

“Trans young people are facing horrific levels of bullying,” she said. “Our 2017 School Report found nearly two in three trans pupils (64 per cent) are bullied for being LGBT, while one in ten (nine per cent) have received death threats.

“As the toxic debate over trans people’s rights intensifies, this contributes to an environment where the bullying of trans students can flourish.”

But Davies-Arai told Schools Week the messages are “factual” and were created to make people think. “At the moment children are taught in schools that they can choose to be a boy or a girl, that it’s their gender identity that makes them a boy or a girl.

“We’re very, very concerned about that message. We have to be much more cautious about the message we’re giving in schools.”

Under the Equality Act 2010, schools must protect against discrimination, harassment and victimisation of people with nine protected characteristics. These include gender reassignment, which applies to a person who is “proposing to undergo, is undergoing or has undergone a process (or part of a process) for the purpose of reassigning the person’s sex by changing physiological or other attributes of sex”.

Schools must also offer equality of opportunity and build good relationships between people who share protected characteristics and those who do not.

In July, Schools Week reported on new statistics that showed almost one in ten of the most serious incidents of homophobic, biphobic and transphobic bullying in schools was actually perpetrated by member of teaching staff.

Davies-Arai said the stickers were not designed for young people to use. However some Twitter users have suggested they would be “great for schools” or for “studying gender for English and sociology A levels”. 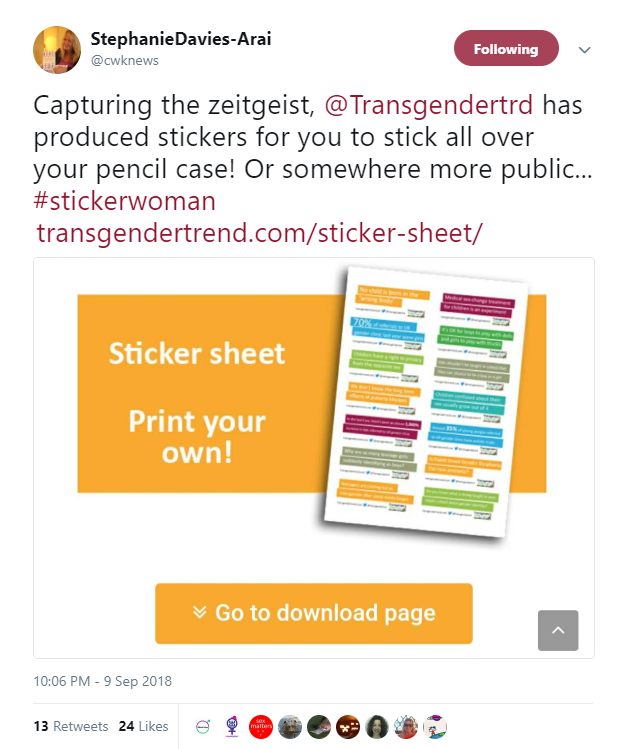 “We’re not imagining that they will be used in schools, they are not aimed at young people but the parents who visit our site.

Transgender Trend is described on its website as a group of parents “concerned about the social and medical ‘transition’ of children, the introduction of ‘gender identity’ teaching into schools and new policies and legislation based on subjective ideas of ‘gender’ rather than the biological reality of sex”. 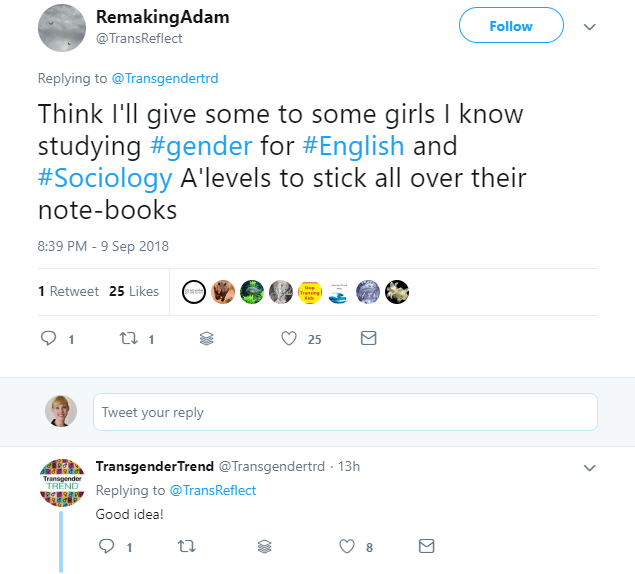 Susie Green, chief executive of the Mermaids UK, a charity that supports transgender young people and their families, told Schools Week she was “concerned about the purpose” of the stickers.

“If used in school they send a clear message to transgender students that their identity is not valid,” she said.

“Transgender young people already suffer from heightened levels of bullying and abuse. These stickers are irresponsible and harmful, and encourages people to break the law and deny trans students basic protections and rights.”

In February, Schools Week reported that schools were being advised by Stonewall to ignore “dangerous” new guidance on pupils’ gender from Transgender Trend, after the group published what it calls a “schools resource pack”, offering advice to teachers and school leaders about how to support pupils dealing with gender issues.

A petition has recently been started on the parliament.uk website calling for a ban on a “recent influx of anti-LGBT+ material being sent to schools in England”, and asking that “any and all material, that is first and foremost designed to give a negative view of the LGBT+ community, be removed from schools”.

It currently has 5,047 and will run until February 10, 2019. If the petition reaches 10,000 signatures the government will provide a response.

“If we want to improve life for young trans people we need more people and organisations to be visible, active allies,” the Stonewall spokesperson said.