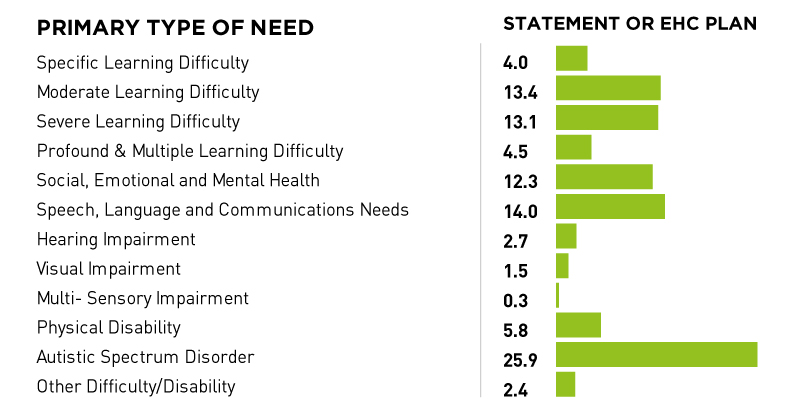 Schools are “struggling” to provide for autistic pupils following a 25 per cent increase in autism diagnoses in the past four years, according to government data and local area inspection letters.

The first published inspections of councils’ “local offers” for special education needs and disability (SEND) provision warn of rising autism referrals and lengthy waits – with a nearly 40 per cent increase in pupils with autism statements since 2012 in one area.

Of the 13 joint inspections carried out by Ofsted and health watchdog the Care Quality Commission (CQC), only one did not mention autism in their final letter – and 11 referred to “rising” demand for autism diagnoses or issues with service delivery. One letter was positive.

Sweeping reforms to SEND provision under the Children and Families Act of 2014 means children are now less likely to be seen as having behavioural needs and are instead recognised as autistic, said Kat Dockery, SEND co-ordinator at Greenwood academy in Birmingham.

“Pupils used to get statements for behaviour and it would be presented as a behavioural difficulty. With that category gone because of reform to the SEN code, they now look at it and think, ‘it might be autism’.”

The number of pupils with special educational needs – although not necessarily an official statement – reduced by 72,660 between 2015 and 2016, according to the government’s most recent census. The overall figure has dropped from 1.3 million to about 1.22 million.

In the inspection letters, Bolton council near Manchester was told providers in its area were “struggling to meet the demand for referrals and diagnosis for autistic spectrum disorders”, with a knock-on effect for behaviour in schools. READ MORE: Half of new special free schools are autism-specific

Gloucestershire county council told Schools Week there had been a 35 per cent rise in children with autism over the past three years, while there was a 39 per cent increase since 2012 in the Greater Manchester combined authority.

Enfield in north-east London was congratulated for addressing rising levels of diagnosis.

Across 13 inspection letters from July to December –which are “narrative” rather than graded judgments – autism was mentioned more than 30 times.

Only one council’s letter, Stoke, did not mention it.

Other special needs such as dyslexia, anxiety, attention hyperactivity disorder (ADHD), Down’s syndrome and hearing impairments were infrequently mentioned, with Schools Week finding one instance of dyslexia, one of Down’s and two of ADHD.

Autism was possibly “the most complex of all special educational needs”

Autism was possibly “the most complex of all special educational needs” because it varied so much between individuals, according to Dockery, yet it was hard to get funding because of some pupils’ high cognitive ability.

“Every pupil with dyslexia has a very similar profile, whereas with autism you can’t repeat your provision for one pupil again and again because they’re all so different.”

Rochdale borough council was told to submit a “written statement of action” after Ofsted and the CQC criticised high waiting times for autism diagnoses and a “lack of ability and expertise of mainstream schools” for pupils with autism.

Two of the council’s four areas of “significant weakness” related to autism. A spokesperson for Rochdale said rising diagnoses was “in keeping with a wider national and regional trend.

“We are aiming to put an ‘autism champion’ in every school to help to ensure the social and emotional wellbeing of pupils who need support.

“Additionally, despite the fact we are faced with the challenge of meeting increasing demands with limited resources, we are now completing a new SEND strategy that includes a significant increase in autism support.”