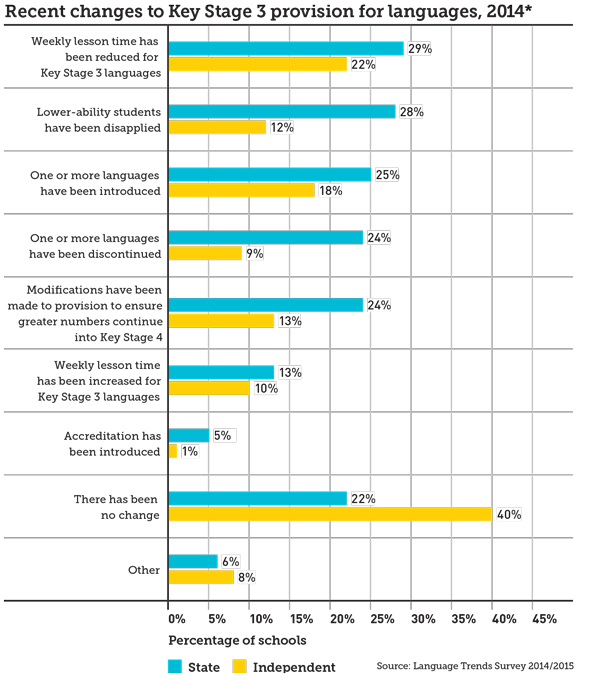 Schools may be discouraging lower-ability pupils from taking languages at GCSE so they do not slip in league tables, a report has claimed.

A joint report by the CfBT education trust and the British Council highlights concern about the uptake of modern foreign languages at both GCSE and A level, blaming too much focus on STEM subjects.

In a survey, secondary schools said the socio-economic background of a pupil led to decisions being made about whether they studied a language.

Responses showed that 18 per cent of schools with a high number of FSM [free school meals] prevented pupils from taking a language at key stage 4; this dropped as the FSM percentage decreased. And 28 per cent of state schools admitted to excluding lower ability pupils from language studies.

The report said: “Opportunities for lower-ability pupils to study languages have been curtailed as a result of the decline of alternative accreditation such as NVQs, asset languages, etc, following the Conservative/Liberal Democrat coalition government’s decision for these and other similar qualifications not to count towards schools’ performance tables.

“Lower-ability pupils may be discouraged from taking a language to GCSE in order to maintain a school’s rating in performance tables.”

The report does show that 99 per cent of primary schools surveyed are teaching languages since the introduction of compulsory language teaching in key stage 2 – although secondary language teachers worry about the quality.

CfBT’s director of research and development, Tony McAleavy, said: “The future for languages is precarious and pupils are increasingly not being given the opportunities and encouragement needed to stick with language learning.

“There is some really good news, too, though. Structural changes have been a call to action for primary schools and the survey offers insight into the need for a focus on the quality of provision . . .”

A Department for Education spokesperson said: “We have made languages a compulsory part of the national curriculum at primary school to lay the foundation for further language study in secondary school, and we are pleased the report recognises the wider, positive impacts of this reform.

“We want to see that trend continue into secondary school and are already seeing encouraging signs following the introduction of the Ebacc, with thousands more pupils studying languages to GCSE, a number we expect to rise.”

More than 1,000 schools took part in the survey.