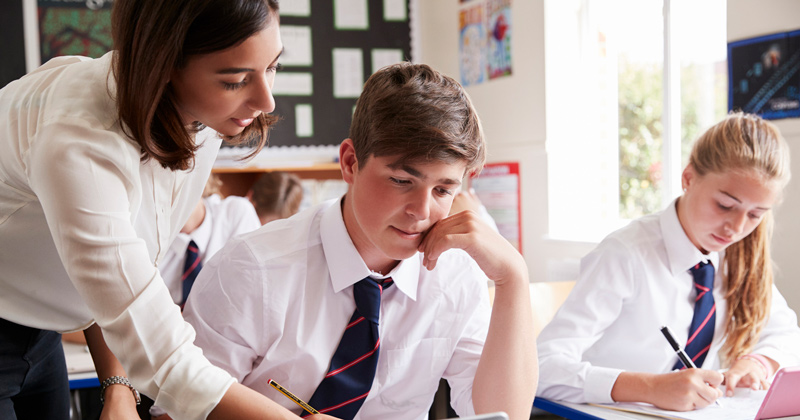 Schools may have to spend more time teaching GCSE maths following an increase in content ushered in under reforms to the qualification, a new report from the exams regulator suggests.

Ofqual investigated how the introduction of reformed GCSEs, first sat in 2017, has impacted pupils’ preparedness for A-level maths and English literature.

The new maths qualification places a greater emphasis on problem-solving and has more demanding content, while closed book exams and assessment of unseen texts were introduced in English literature, along with a broader range of texts.

Thirty-one teachers across 21 schools and colleges were interviewed on how the changes affected pupils. The first cohort to sit the reformed GCSEs sat their A-levels this summer.

Some teachers warned of a lack of time during pupils’ GCSE years to teach the necessary skills, limiting preparation for A-levels.

The amount of time schools take to teach GCSEs more generally has become the subject of intense debate in recent months, after Ofsted adopted an increased focus on curriculum and an apparent clampdown on three-year GCSE programmes.

And this newspaper revealed earlier this month how inspectors allegedly told school leaders that awarding an ‘outstanding’ rating was out of the question because they ran three-year GCSEs.

According to Ofqual, one teacher noted that due to an increase in maths GCSE content of “about 25 per cent”, schools have been forced to increase the time spent teaching maths.

Ofqual noted this would support the transition to A-level, but “only in schools where this provision is possible”.

However, despite concerns about teaching time, the majority of teachers told the regulator that overall preparedness for A-level under the reformed GCSE was at least as good as, “if not better” than the legacy qualification.

This increased preparation had the knock-on effect of reducing the time spent teaching lower level content at A-level, and one teacher said it removed the “shock” of stepping up.

However, some teachers suggested that due to the A-level exams also being reformed, pupils were still left unprepared despite being more skilled.

Elsewhere most teachers found the reforms improved mathematical problem-solving and some reported an increase in confidence.

This led pupils to be better equipped when applying maths across a range of concepts at A level.

Some teachers did vent frustrations that the assessment of problem-solving “did not assess the application of maths” but rather memory of how to perform maths.

The report paints a mixed picture for GCSE English literature, with a warning that curriculum changes will likely take time to “bed in”.

Around half said pupils who had taken the reformed GCSEs were more independent and confident, while others noticed “a reluctance to engage”.

Unlike the legacy qualification, all exams under the new GCSE in English literature are closed-book, meaning pupils can’t take in texts, notes or other reference material.

However, the reformed A-level English literature qualification uses open-book exams, and most teachers told Ofqual this meant their pupils needed to learn how to make full use of text during open book exams.

But other believe the use of closed-book exams gave pupils a stronger revision technique, which was transferable to A-level.

The report ultimately determined that “generally” both maths and English literature teachers felt positive about pupils preparedness in the coming years and felt this would improve as they become more confident teaching the reformed GCSEs.