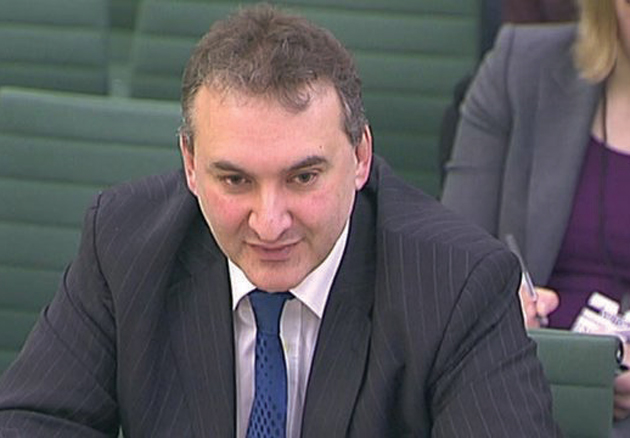 The Department for Education cannot successfully predict local teacher recruitment and is “a long way” from being able to do so, its chief has admitted.

But data compiled by the department, and seen by Schools Week, shows the government is aware that some schools have at least 10 per cent of teaching posts unfilled.

Quizzed in parliament on Monday, the permanent secretary of the Department for Education (DfE), Chris Wormald, defended the government’s teacher training policies, despite their failure to meet recruitment targets for four years running.

A recent report by the National Audit Office, which prompted this week’s Public Accounts Committee hearing, also showed a nine-fold increase in teacher vacancies between 2011 and 2014.

Mr Wormald with Sinead O’Sullivan, director of programme delivery at the National College for Teaching and Leadership – which is responsible for teacher training – said on more than 12 occasions to the committee that the government’s School Direct scheme, in which schools recruit trainee teachers, was the answer to recruitment problems.

This was despite MPs at the hearing pointing out that 57 per cent of schools are not taking part in the scheme.

Mr Wormald (pictured) said: “Will we ever from a national department be able successfully to predict some of these very local things? Certainly not on our current quality of data, and I think we would be quite a long way from that. It is one of the reasons why we think school-led approaches to teacher training are a good thing because they allow local leaders to react much more to individual local circumstances.”

Ms O’Sullivan agreed: “The more local you get the more challenging it is for us to be able to analyse what is going on using data. That is why a dialogue with schools is so important.”

But data showed by Marcus Bell, director of the DfE’s teachers and training group, during a public event at the RSA in November, revealed the extent of local variations.

He said the department had been looking into regional variations because it understood them “far less well” than the national picture and that “there might be very different positions in different areas that are being concealed by national data”.

The data shows vacancy rates at schools in three local authorities. In two of the three there are a number of schools with at least 10 per cent of teaching posts unfilled. However, in the other almost all schools had no vacancies.

Mr Bell said at the time this showed local data was complicated and did not give an overall picture of whether recruitment was “good or bad” in local areas.

He also suggested the issue may relate to problem schools, rather than local recruitment markets.

“This data needs further analysis so the sort of thing it might be picking up, and we don’t know yet, is that schools with high levels of vacancies are perhaps schools that are struggling.

“Maybe they are all in a particular sub area of the local authority . . . so there is a recruitment problem in the coastal areas of a county, rather than all of it.”

During the parliamentary meeting, Labour MP Caroline Flint raised concerns that the teacher recruitment crisis was not being taken seriously by the government.

“Can you imagine how galling it is for headteachers in different parts of the country who are facing real difficulties in getting good new teachers in the disciplines they need when it does not sound like the [DfE] is taking seriously their concerns?”

Mr Wormald said again that the government’s School Direct scheme was the answer.