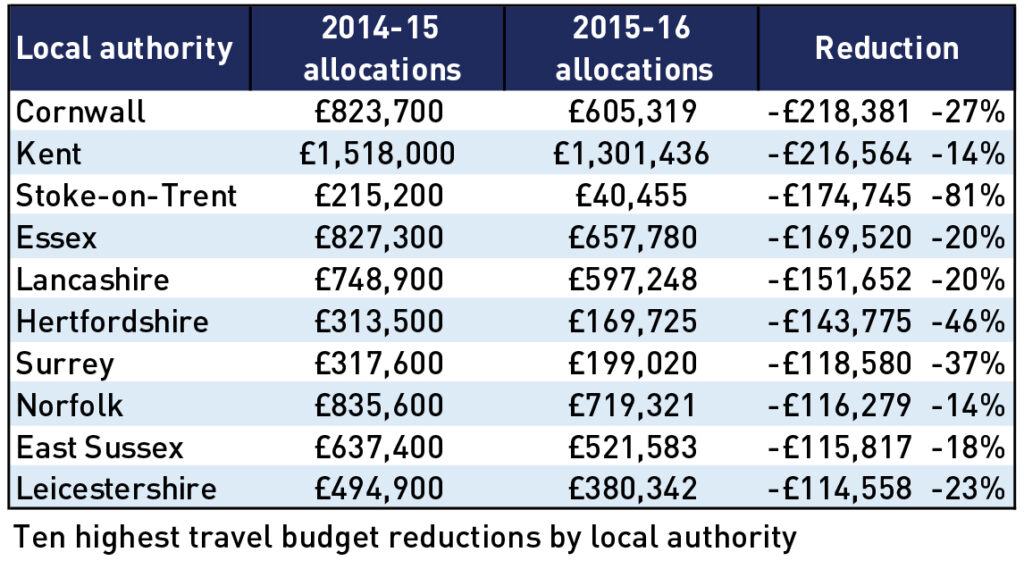 On Wednesday, the Department for Education (DfE) set out funding allocations for extended rights to free school travel for the financial years 2014/15 and 2015/16.

Part of the Local Services Support Grant (LSSG), the funding is paid by the Department for Communities and Local Government (DCLG) to each local authority to provide additional transport funding to support children from low-income families to help them attend schools further than two miles walking distance for children aged 8 and under, or three miles for those between 8 and 16.

Shaun Pender, portfolio lead for school transport at Stoke-on-Trent Council, whose budget will be cut 81 per cent, said: “We were not expecting this. Our statutory obligations to provide this service do not change, so we will now need to assess how this will impact on our finances.”

James Joyce, chairman of the children’s services committee at Norfolk County Council, is facing a 14 per cent cut. He said: “This announcement was not something we were expecting. The cut comes at a time when, as everyone knows, we are already facing huge financial pressures across the authority.

“We will always meet our statutory duties but as a result of this decision we now have less money from the government to cover the cost.”

Lancashire county councillor Matthew Tomlinson, cabinet member for children, young people and schools, said: “We only found out about the reduction in funding today.

We will now have to consider the implications the reduction will have before the change comes into effect in April.”

A spokesman for Cornwall County Council said that it had only just received news of the cuts and that it was too soon to say what the implications would be.

A DfE spokesperson said: “We expect there to be no loss to eligible children – figures have been calculated from data collected in the spring census 2014.

“We are maintaining our support to rural areas where pupils have to travel further and transport costs are higher.”

While this announcement surprised some local authorities, others were aware of the changes but conceded that it would force alterations to their budgets.

A spokesman for Hertfordshire County Council, which faces a 46 per cent cut, said: “We were expecting a reduction, which will be considered within the context of overall funding changes, including those expected in the provisional local government settlement that was due yesterday.”

A spokesperson for Leicestershire County Council said: “We are aware of the funding announcement and are analysing the figures to assess the implications.”

An East Sussex County Council spokesperson said: “We were aware of the reduction and, as part of our medium term financial planning, have identified compensatory savings across our children’s services budget to address it.”