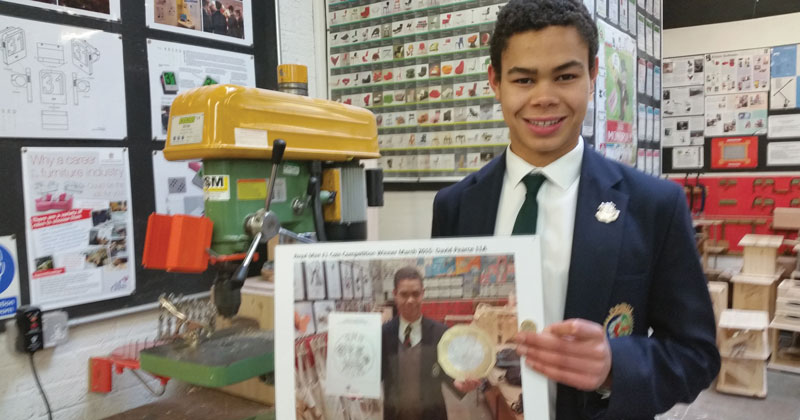 A pupil encouraged by a teacher to enter a competition to design the new pound coin says he will be keeping his achievement “as quiet as possible” when he heads to university.

Two years ago David Pearce, now 17, submitted an entry to design the new coin. On Tuesday his entry became a reality when the 12-sided pound was introduced across the country.

The old coin was scrapped because of fears that it had become too easy to counterfeit.

But the A-level pupil at Queen Mary’s Grammar School in Walsall will not draw attention to his success when he takes up an offer – conditional, as he is quick to point out – to study architecture at Clare College, Cambridge.

“I’ll probably want to keep it as quiet as possible – my friends are more excited than me.”

Pearce was encouraged by Paul Hughes, his design and technology teacher at Queen Mary’s, to submit an entry to the Royal Mint to design the reverse side of a new coin.

The new pound, which has a darker nickel brass rim and a lighter inside of nickel-plated alloy, needed an image that “unambiguously represented the UK”.

After researching the patterns featured on past coins – including “the Queen’s beasts” such as the lion, and various flowers – Pearce’s design drew on the symbolic plants for each of the UK’s four nations: the rose, leek, thistle and shamrock, encircled by a royal coronet crown.

Pearce, who beat 6,000 entries, admits his mum’s pretty happy about his success.

He also admits that Hughes – who taught him from year 7 to year 9 and is his teacher once again this year (he is studying design and technology, maths and geography A-level) – is pretty pleased too. “Yeah, I think he’s proud.”

“It’s been a fantastic journey. He’s such a deserving boy as well, so unassuming.

“There will be this representative thing from the school in everyone’s pockets, and lots of people will know.” The pound will feature a tiny “DP” – Pearce’s initials – on his design.

Hughes, who helped 400 other pupils at the school to enter the competition, says the coin is “a far superior design to what we’ve had before”.

“It’s really nice that as a subject that has suffered over the years, DT has been shown to be doing something very, very positive.”

Fifteen people, including Swain, and  Pearce and his mother, were invited to No 10 after then chancellor George Osborne rang the school to say Pearce had won.

They were joined by Cody Gill, another Queen Mary’s pupil, who made the shortlist.

They were all given a “free rein” to look around No 10, including the state room used for official visits. “It was an incredible experience for us all,” Swain says.