The proportion of schools that were full or over-capacity fell slightly last year, new data shows.

Department for Education statistics released this morning show 15 per cent of secondary schools were full or over-capacity in 2018, down from 16 per cent in 2017.

The figures come as the schools community readies itself for a population bulge, prompted by the early-2000s baby boom, which will move from primary level in the coming years. Data published last summer shows secondary schools will have 418,000 more pupils by 2027. 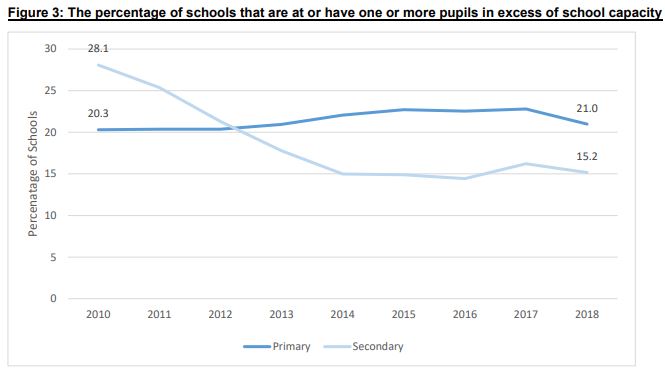 According to the government, unfilled places can be evidence of local authorities planning ahead for future need.

Unfilled places “can also be attributed to the building of whole new schools, which fill up from the bottom, leaving space in the upper years until those year groups work their way through”.

“In some areas, low or declining need for places will also contribute to the number of unfilled places.”

Education secretary Damian Hinds said the government was “undertaking the biggest expansion in school places in two generations”, adding “the statistics out today show we are well on track to create one million places this decade”.