A superhead received “unauthorised” payments of nearly £300,000 that helped to plunge his former federation of schools into deficit, court documents have revealed.

Sir Craig Tunstall is suing Lambeth Council in south London in the High Court for at least £200,000 over claims that an “excessive workload”, exacerbated by plans to open a free school, left him depressed.

Tunstall, formerly England’s best paid primary headteacher on £367,000 a year, was dismissed as chief executive from the council-maintained Gipsy Hill Federation (GHF) in 2018 for “gross misconduct”.

Until now, the details behind his dismissal have been secret, despite requests by Schools Week for investigation reports to be published. The council said this would breach the Data Protection Act and “could cause distress to the individuals”.

But papers submitted to the High Court by lawyers on behalf of Lambeth and GHF reveal Tunstall and two senior colleagues were found to have received unauthorised payments totalling nearly £500,000 – leaving a hole in the federation’s finances.

A disciplinary panel also found that a text sent in May 2017 by Tunstall to Lambeth’s head of schools’ HR, in which he called her a “vindictive c**t”, was “bullying, abusive and highly unprofessional” (see below).

The council’s submission was presented to the court in response to Tunstall’s lawsuit. 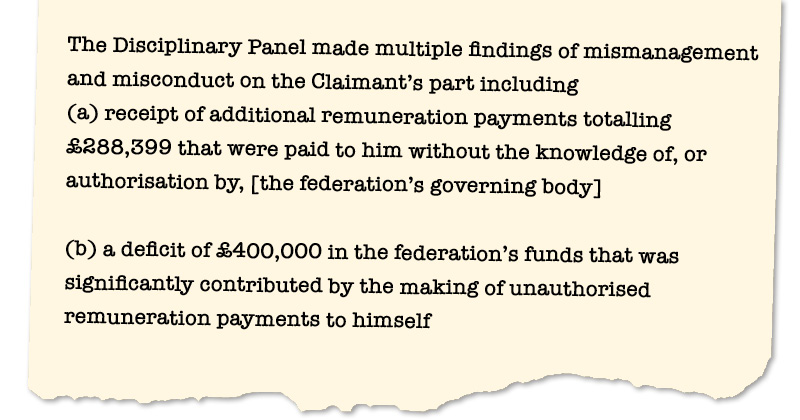 The papers say an Internal Audit and Counter Fraud Service investigation uncovered evidence that Natalie Walters, GHF’s head of human resources, had been using electronic signatures, without approval, to procure payments from Lambeth’s payroll department – including “substantial” payments to Tunstall.

The investigation report, into “failures on the part” of Tunstall, identified evidence of “failure to adopt and operate proper financial systems”, “failure to control budgeting and expenditure” and “accepting remuneration payments that had not been authorised” by GHF.

The subsequent disciplinary panel made “multiple findings of mismanagement and misconduct”.

This included that Tunstall was allegedly in receipt of additional sums – totalling £288,399 – that were paid to him without the knowledge, or authorisation, of GHF. Tunstall was suspended in May 2017.

The papers say the panel also found a deficit of £400,000 in GHF’s funds that was “significantly contributed by the making of unauthorised remuneration payments”. As well as the payments to Tunstall, these include £105,491 to Walters and £103,926 to Kevin Sparkes, the federation’s finance director, the court documents reveal. .

However, in a legal response to the council’s submission, Tunstall’s representatives say no allegations of fraud or dishonesty are made against him, and that it is not alleged that he was aware he was receiving unauthorised payments. They say the fact that any such payments were unauthorised or unlawful is denied.

They also say it is not alleged that Tunstall “colluded” with Walters or Sparkes, or anyone else, to procure unauthorised payments to himself or others.

The council papers say that at a meeting with governors and the council in March 2013, Tunstall indicated he would take a “less-hands-on role” as chief executive in a restructure, which he denies. The council also claimed Tunstall was told he should not continue to “receive large payments every time a new school joined” the federation.

Documents show he had received additional yearly payments of up to £46,000 for each new school.

GHF governors must approve any further salary increases and payments, the papers say he was told.

From November that year, the papers claim Walters submitted “various” signed payroll forms that “purported” to authorise payments to Tunstall as part of his remuneration package, despite not being approved, by using electronic signatures of the-then chair of governors.

Lambeth claims that in March 2017, two months before his suspension, Tunstall told an HR officer at GHF that he had only recently become aware of various “ongoing allowances and honoraria” that were being paid to Sparkes and Walters and that the payments should stop.

But, it claims, he “did not take any steps” to stop the unauthorised payments that he received.

Lambeth denies that Tunstall’s later dismissal in 2018 was unlawful.

In his claim to the High Court, Tunstall’s representative Asela Wijeyaratne said plans to academise the federation’s eight schools in 2016, which included setting up a new secondary free school, “resulted in workload and work pressure that was too great”.

Lambeth denies this, saying that his role as executive headteacher at each school had “diminished significantly”.

He had “enthusiastically” promoted the expansion of GHF.

But Tunstall’s legal team claims that in December 2016 he sent an email to Lambeth council about the academisation and the free school project, saying he was the “lowest I have ever been in my teaching career” and his “personal well-being has been eroded with every day of delayed conversion”. He also claims he had informed a previous chair of governors he had been diagnosed with depression.

Tunstall has also issued papers for a separate employment tribunal hearing on claims he was unfairly dismissed and for damages.

In a statement, Lambeth Council said it understood that Tunstall was seeking a stay of his High Court claim, pending the outcome of the employment tribunal.

Commenting on behalf of GHF, Lambeth council said that it would be “disputing” the contents of the latest reply by Tunstall’s representatives.

The court documents reveal Tunstall also sent a text to a HR manager at Lambeth calling her a “vindictive c**t”.

The manager had texted Tunstall in May 2017 after he had been signed off work with a “stress-related problem” to consult on a response after the press had found out about his suspension.

The papers say he replied saying: “Are you trying to kill me? Is that what you f**king want!? I’m in bed unwell, signed off sick and it’s my Friday night. Are you trying to totally destroy me? F**k off you vindictive c**t. Put it on your CV.”

The disciplinary panel found the message was “bullying, abusive and highly unprofessional”

Also, on the same day GHF wrote to parents about his suspension, the papers allege Tunstall sent a zip file to at least 21 individuals containing “confidential information, offensive comments and inaccurate information”, including describing one of Lambeth’s employees as a “useless b*tch”.