A slight uptick in Covid rates among young people is “almost certainly” the result of reopening schools, Boris Johnson has said.

But a government medical chief said the case rates rise was not a “dramatic increase at this point”, and that the situation was “likely to become clearer over the next two weeks”.

The latest Covid infection survey published by the Office for National Statistics shows the proportion of children in school years 7 to 11 testing positive for the virus increased last week, while infection levels among younger children remained relatively flat.

Almost certainly because of the opening of schools again, you’re starting to see some of those graphs starting to curl a bit

Challenged on why restrictions are not being lifted more quickly at today’s Downing Street briefing, Johnson said the data showed the continued need to be “cautious in our approach”.

Schools reopened more widely to pupils from March 8 as part of the first stage of the government’s roadmap out of the current lockdown. Some measures, such as meeting in larger groups outdoors, are allowed from today, but the next major stage in the roadmap is April 12, when hospitality venues will partially reopen, along with gyms and hairdressers.

Ministers have made a point of allowing five weeks between each major change in the lockdown to allow the effect of individual measures to be seen in data.

Johnson said the answer to the question of faster lifting of restrictions was seen in the data, adding: “Because of the relaxation that we’ve seen, almost certainly because of the opening of schools again, you’re starting to see some of those graphs starting to curl a bit like old British Rail sandwiches, moving upwards a little bit in the younger groups”. 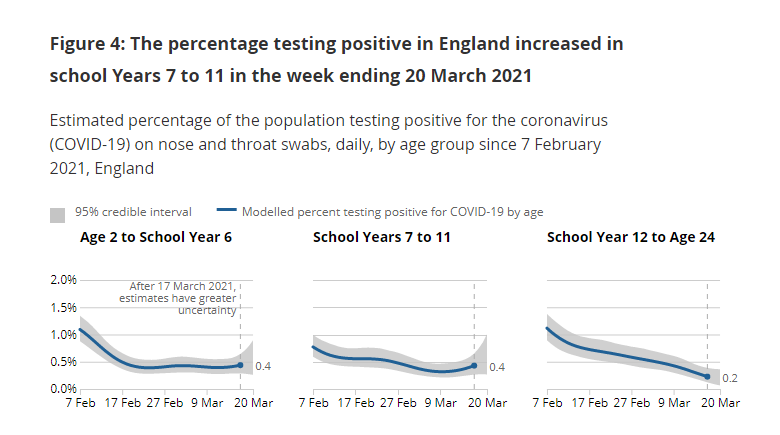 “You’ve seen what’s happening on the continent, and we’ve seen that happen before. That’s why it’s so vital that we do what we’re doing right now. We’re continuing to fortify the population, roll out the vaccine at the speed that we are. Make sure everybody gets their second dose when they’re asked to come forward. But just make sure that we are cautious in our approach.”

Professor Chris Whitty, the UK government’s chief medical officer, said today that an uptick in transmission among younger people was “inevitable” following the reopening of school.

“The bit of the roadmap opening up that has happened so far is opening up schools. And what you can see on this, and I think this is likely to become clearer over the next two weeks is that there has been a steady decrease in the rates of Covid over the last several weeks in most age groups, but there’s been a flattening and possibly even a slight uptick in transmission amongst children of school age.

“This isn’t a dramatic increase at this point, but this is inevitable that as bits of society open up there will be some increases in transmission, and we should expect that. It is one of the things we have to anticipate.”

Sir Patrick Vallance, the government’s chief scientific officer, said that data published next week, the fourth after schools reopened, would allow the government to better analyse the impact.