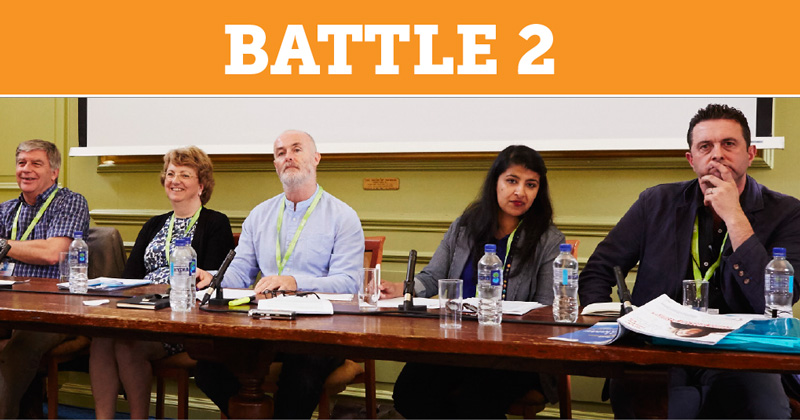 A government programme aimed at stopping youngsters being drawn into terrorism is creating a climate of “suspicion and mistrust”, claimed headteacher Terry James.

The second session of the Battle of Ideas asked whether the government’s anti-radicalisation programme Prevent was “turning teachers into spies”.

James, head of Queen’s school in Hertfordshire, said he agreed with Labour MP Andy Burnham that the Prevent brand had become so toxic it “had to go.”

“There’s a climate of suspicion and mistrust, instead of eradicating it [radicalisation], it is making conditions for it to flourish.”

He described the Prevent training he was “subjected to”, as one of the “most depressing and annoying experiences of my professional life”.

The consultants delivering the training refused to take any questions and claimed the training course was not anti-Muslim and was relevant to both primary and secondary heads.

“But of 20 case studies, 19 were about Muslim radicalisation. One at the end, which looked like a real after-thought, was a young lad in the north being encouraged to join the English Defence League.”

He said none of the slides featured primary-aged pupils: “If I had been a Muslim or a primary school teacher I would have been even more annoyed.”

Liz Watts, research director of EdComs, said a recent survey of 112 teachers by her organisation found 50 per cent thought the Prevent strategy was effective in their schools.

But she said that many believed Prevent had become “one dimensional”, noting some were concerned it did not help schools where pupils were at risk of being radicalised by extreme right-wing groups.

“Teachers are reacting against the need to provide a more balanced view. Schools do not see it as the answer to all their problems.” Zubeda Limbada, founding director of social enterprise ConnectJustice, said some teachers felt their ability to debate was being “undermined as they have to be the vanguard to prevent pupils being drawn into terrorism”.

That was echoed by Toby Marshall, who has taught sociology and philosophy in further and higher education.

“Truth, openness and transparency is the cornerstone of a liberal education. Pupils are free to express their views without fear of monitoring.

“If we value free speech then we should re-enact it. Prevent shuts down free speech.”

However, Watts said 70 per cent of teachers reported they were confident to challenge extremist ideas by students.

“When ideas are presented before them, yes they can deal with them and talk about them, but actually identifying those students seems a step too far. That seems to be the nub of the issue.

“Teachers do feel schools are encouraging debate and discussion around terrorism and extremism. It’s not that debates are being shut down, but identifying and categorising individual students is where we seem to be falling short.”

But Limbada said her work with different communities found that Muslim pupils felt targeted by the strategy.

“Prevent, if done wrong, has serious consequences. We need all young people to be able to air grievances in safe spaces.”

But Marshall added: “One of the greatest obstacles to win over the hearts and minds of the next generation is fear and uncertainty over political ideas, and anxieties over unintended outcomes of our discussion.

“Prevent might be causing problems to this, but if not Prevent, then what?”