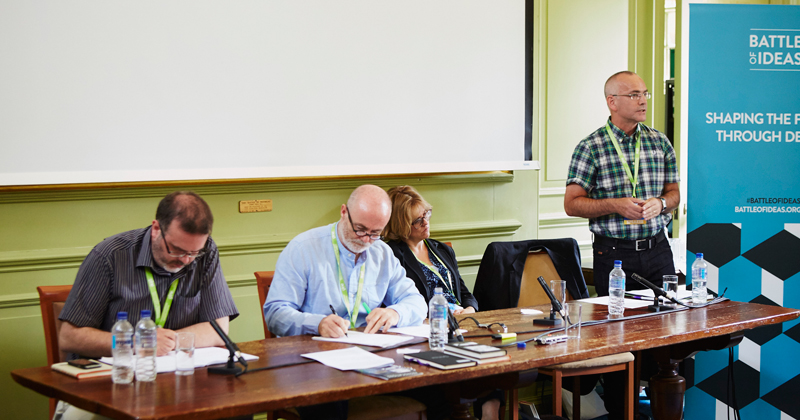 In the final Battle of Ideas session at the Telegraph Festival of Education, Gareth Sturdy said he believed the focus in teaching on dealing with pupils’ self-esteem allowed them to produce “all manner of excuses for poor behaviour or achievement.

“It’s a bit of a mask for children to not focus on the business of learning, that’s my experience.

“Learning things is hard – it’s an affront to your self-esteem and it’s difficult to get to grips with.

“Students often find that a challenge. If you approach students in the situation by saying ‘are you OK?’ and ‘is everything all right?’ then the transition of knowledge does not get done – which is the job I’m there to do.”

He denied there was a mental health crisis, but instead said the problem was how adults referred and related to children, using a language that had been “medicalised”.

Ken McLaughlin, a senior lecturer at Manchester Metropolitan University where he teaches modules including mental health, added there had been an “exponential growth of diagnosis criteria” in recent years.

“Is it the supply of therapists that is promoting the demand for therapy?” We lived in an “anxious age”, he said, “but the last thing we need is more awareness raising. It just makes us sick.”

However Rachel Kelly, an author and mental health campaigner who has suffered with depression, said: “I feel strongly that if I had known more about it [mental health] then I would not have been so ill.”

But Sturdy disagreed. “Talking about it has become a bad thing. Incidents of self-harm have increased after lots of groups go into schools and ask if pupils self-harm? That’s a real problem out there.”

McLaughlin added that young people should be left to “develop themselves. Going through adolescence and puberty can be a painful time. It’s undermining their ability to move into adult life.”

But Kelly said the severity of the mental health problem should be discussed.

She said research by Dr Kristin Neff, from the United States, suggested there was a “growing concern we’ve gone down the wrong track with youngsters and self-esteem.

“The conclusion she reaches is that fostering self-esteem has been a disaster for teenage mental health.”

Kelly instead suggested promoting “self-compassion”, which “is a very different mindset. It is much more about our commonality and what unites us, as opposed to what’s different and separates us.”

But she said schools should be discussing how bad the mental health problem was. “What direction can we take to foster good mental health and resilience? What can we do as teachers?”

She suggested putting strategies in place within education from early on – such as breathing exercises.

“If that becomes part of the curriculum alongside exams, maybe we wouldn’t have such a problem.”