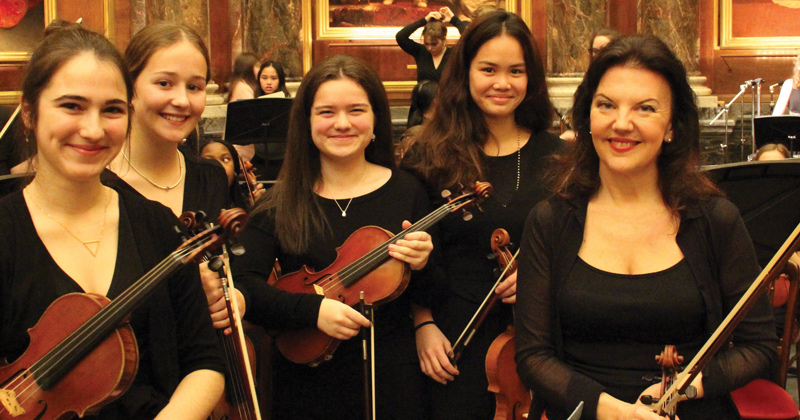 Budding musicians have had the chance to perform with a world-famous violinist at a concert celebrating their school’s 95th anniversary, and the centenary of the English Speaking Union, an education charity.

Pupils from Benenden School’s symphony orchestra played pieces by Mozart and Vivaldi in support of Tamsin Little (pictured far right), who received the ‘Critics’ choice award’ at the 2011 Classical BRIT Awards, at a concert at London’s Symphony Hall.

The school orchestra also performed a piece composed by a former pupil of the school, Grace Young.

The joint celebration came about as the school and the charity both share the Princess Royal as their patron.

“We are honoured that our Symphony Orchestra performed with Tasmin Little in such magnificent surroundings,”
said Samantha Price, the school’s headmistress. “We are committed to not just helping pupils to reach the very highest standards of performance but also to widening participation in music.”

“I really appreciated their attentiveness and intensity as well as their willingness to take on board musical ideas and incorporate them immediately into our performance,” said Little.