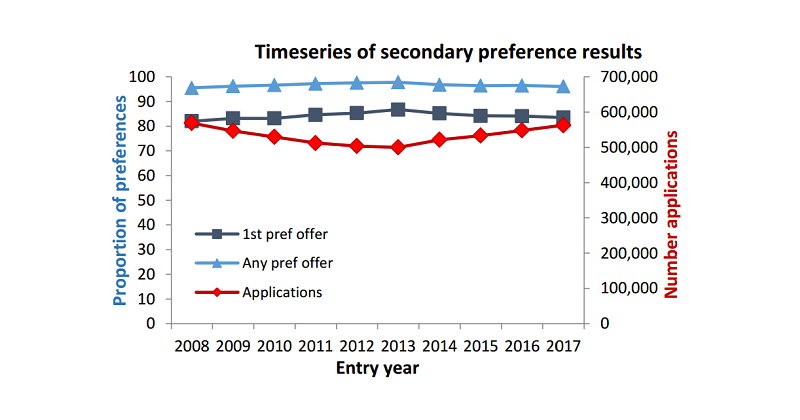 However, the decrease comes at the same time as the number of children applying for secondary places rose to its highest level in almost a decade.

A ‘baby bulge’ has moved through primary schools over the past seven years though the pressure on primaries now looks set to ease.

Applications for primary places dropped 3.3 per cent since last year, down to 620,330 – the lowest level seen in the four years for which figures have been collected.

In turn, the proportion of pupils receiving their first choice of primary school place has now risen from 88.4 per cent last year to 90 per cent this year.

The proportion getting one of their top three preferences is also up from 96.3 per cent to 97.2 per cent.

At secondary school, the proportion of pupils getting one of their top three choices for a place also fell, from 95 per cent to 94.6 per cent.

A Department for Education spokesperson said the “vast majority of parents continue to secure a place at their first choice of school for their child”.

The department says the combined figure for primary and secondary schools was 86.9 per cent this year – “with more than 95 per cent having received offers at one of their top three choices”.

There were large variations across regions. The areas with the lowest first preference rates at secondary school were all in London – Hammersmith and Fulham (53.6 per cent), Westminster (56.6 per cent) and Lewisham (57.8 per cent).

Hammersmith and Fulham and Westminster have been in the lowest three local authorities since 2015, but both achieved higher preference rates this year compared to 2016 (52.0 per cent and 53.4 per cent, respectively).

London is also the area with the lowest first preference rates at primary – 85.9 per cent, compared to 83.7 per cent last year.

However that is much better than the region’s secondary first preferance rates – which are 68.2 per cent at secondary level.