Performance measures published by the Department for Education this morning reveal that 64 per cent of pupils in MATs reached the expected standard in the combined reading, writing and maths attainment measure.

This is lower than the national average of 66 per cent.

In more than half of MATs (53 per cent), the number of pupils reaching the expected standard was lower than the national average.

The findings, published just hours after the results of the general election were announced, are likely to provoke criticism of the effectiveness of the academy programme.

However the government release warns the statistics “cannot be interpreted as how academies or MATs are doing as a whole”.

In individual progress measures, pupils in MATs make more progress in writing than the national average, but fall behind in reading and maths.

The figures show that, in almost a third of MATs, progress scores in reading (29 per cent) and maths (28 per cent) were either below or well below the national average. In writing this was 20 per cent.

However, almost a third of MATs (31 per cent) had progress above or well above the national average in writing, as well as 24 per cent in maths and 20 per cent in reading.

In June 2018, analysis by the Education Policy Institute found that MATs were not better performing than local authority schools.

It warned that academy chains are “disproportionately represented” amongst the worst performing groups of primary schools, with 12 MATs making it into the bottom 20. Just one – Harris Federation – was in the top 10 of best performing primary school groups. 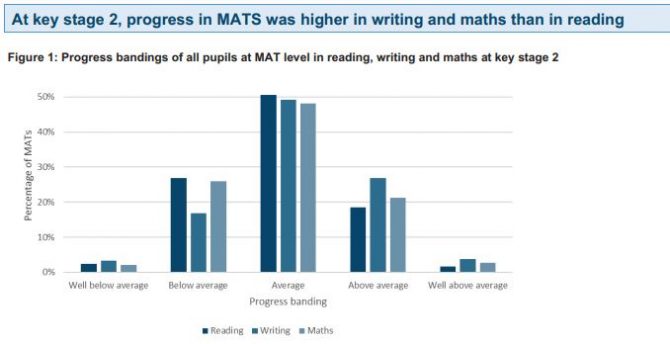 Combined reading, writing and maths was introduced as a performance measure for MATs for the first time in 2018-19.

To be included in the statistics, MATs must have had at least three schools for three years. School figures are weighted according to the length of time they have been in the MAT and their cohort size. The DfE said the figures “cannot be interpreted as how academies or MATs are doing as a whole” as the academy chains included change each year.

The report found that, while attainment in converter academies – those that elect to become academies – is slightly higher than the national mainstream average, it is the lower attainment of sponsor led academies and free schools which brings down overall MAT attainment to being below average.