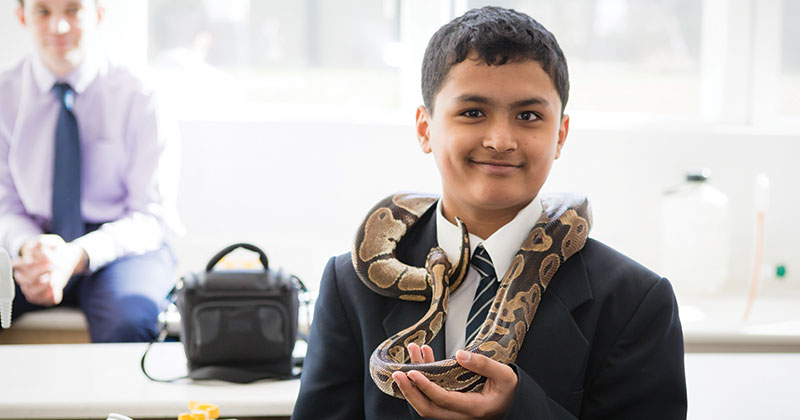 Inspired by British Science Week, Reigate Grammar School in Surrey recently hosted a week of activities for pupils and parents, with each day focusing on a particular area of science.

Events included an “Animazing” day, where students got the chance to learn about and handle a reticulated python – a species which has been known to eat a human – and giant rabbit.

An engineering day focused on pupils building an emergency shelter; in the science fiction day, music and English departments wrote, composed and filmed sci-fi themed material that was collated into an anthology.

Students also had a talk from Colin Wright, who travels the world talking about the mathematics and science behind the art of juggling.

The event in late March was also open to budding scientists from local schools, but parents too were invited to attend a lecture by Professor Trevor Jones from King’s College London on how medicines are discovered.

The acting head of biology and the school’s scholarship programmes, Michelle Pope, said: “It has been fantastic to see so many RGS students exploring science beyond the curriculum.

“Science Week is an important vehicle to develop the younger pupils’ enthusiasm for science and to further extend senior students’ knowledge beyond the exam syllabus.”