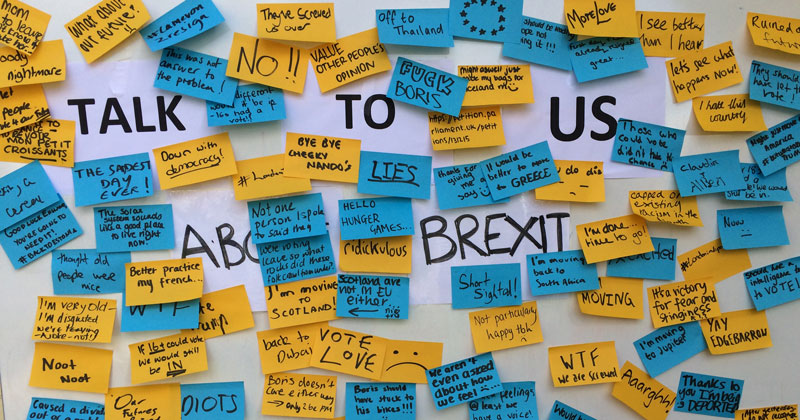 School pupils at last week’s Festival of Education have condemned the vote to leave the EU with a passionate Brexit statement that says “Britain has chosen nationalism and exclusivity over unity”.

The statement, posted on Twitter by Schools Week from the festival at Wellington College on Friday, was retweeted hundreds of times – with users saying youngsters across the country were echoing the students’ sentiments.

The group of 13 to 17-year-olds said the “shocking and deeply disturbing news … marks the beginning of a time filled with unfathomable uncertainty”.

Their statement read: “By leaving the EU, we are losing much of what makes our country ‘Great’. So, on behalf of the youth of Britain, we would like to condemn those who have decided our destiny for us.

“Whether it is good, or catastrophically bad, it is us who will be affected by this decision in the long term. It is us who were denied a vote.”

Many schools had used the EU referendum to host their own classroom votes. Eight primary schools took part in a mock vote in parliament last week, organised by First News, a newspaper for seven to 14-year-olds.

Pupils debated topics, including migration, travel and culture, before 73 per cent of about 100 children in the audience voted in favour of Remain.

Jude Enright, a deputy headteacher and education blogger, said that all the school referendum results she had heard of were “overwhelmingly to remain”.

An age breakdown of the EU referendum polling shows that 75 per cent of 18 to 24-year-olds voted to stay in the EU.

Stephen Tierney, executive director of the Blessed Edward Bamber Catholic multi-academy trust, based in Blackpool, writing on his Leading Learner blog, said: “A younger generation who overwhelmingly supported Remain appear angry; their future has yet again been damaged by an affluent older generation.”

The student signatories said it was “highly doubtful that they [over-65s] will feel the full impact of this”.

Their letter read: “Of course everyone should have the right to vote. But we, 13 to 17-year-olds, who have our whole lives ahead of us, and who will now have to observe the EU from a distance, were denied a vote.”

Julian Thomas, master of Wellington College, said that lowering the voting age could be something up for consideration on “issues that most affect their future”.

“If this were to happen, schools must then accept the responsibility of offering a balanced education over the issues to allow those young voters to make reasoned and thoughtful decisions. For the good of the country, we must find a way of channelling the passion and energy we have seen this week.”

However some Twitter users did highlight concerns about the letter, with one stating: “Very annoying that the younger generation think their vote is worth more than the older generation.”

Boris Johnson, Vote Leave campaign leader, has also moved to reassure youngsters. He said: “Young people who may feel that this decision in some way involves pulling up a drawbridge or any kind of isolationism, I think the very opposite is true.